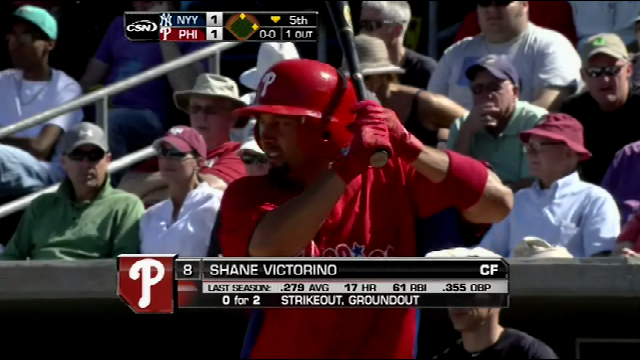 "It's early". I've heard that a million times this season.  At now 28-29 it is most definitely NOT early anymore.  At five games back, Phillies are on pace to finish 15 games out.  Isn't it about time to close that gap a little bit?

"If we just hang in there until Howard and Utley get back…"  Get over that.  As our PITA @hiphop_JORGE exclaimed earlier this game on twitter, " Howard can't run. Utley can't field. Sh** ain't gonna change anytime soon."

There is no indication the Phillies will get anything out of either player.  Howard we can see progressing from his surgery, and we know that he is moving towards coming back.  But, we know it will be a while.   Utley, on the other hand, still has no cartilige in his knees and I seriously doubt his ability to ever play second base again.

1.  Remove Jimmy Rollins from the leadoff spot NOW.  Yesterday Jimmy Rollins remarked that the Phillies won the World Series with Rollins in the leadoff spot.  2008 was a long time ago.  The 2007 Red Sox World Series champs won a World Series with Jacoby Ellsbury leading off.  Would the Red Sox have been better two seasons ago if Ellsbury was leading off?  Ellsbury had an atrocious year, but the Red Sox did not keep him in the leadoff spot because of yesteryear.  The Phillies lineup should be based on merit, not on what the team did in 2008.   If Juan Pierre is hitting .340, let him lead off and get on base.  Bat Rollins 7th.

2. Trade Shane Victorino.  Why Shane?  1) He's underperforming 2) There are other table-setter types on the team 3) He retains some value in trade 4) He likely won't be retained after this season anyway and 5) There are options to replace him.  The Blue Jays already reportedly checked in with the Phillies about them trading Shane Victorino.

3. Call up Domonic Brown.  Domonic Brown is hot.  Just tonight he went 4-5 with two home runs and has been on fire.  Despite a really rough start, Brown is now hitting .282 with four home runs.  While he has some confidence and is on a roll, call him up.  Brown has been seeing some time in center field.  I say call him up, add a spark to the Phillies' anemic offense.  Start Brown in center, and move him to left and bring in John Mayberry Jr. in late innings for defense.  Let Juan Pierre have left field.

4. Trade for a Bat.  Don't let Kevin Youkilis go somewhere else.  If indeed Kevin Youkilis is available, the Phillies should seize the opportunity.  The two places the Phillies could stand to add offense are second base or third base and left field.  Placido Polanco would still make for a viable second baseman, and Freddy Galvis would still get plenty of playing time backing up all infield positions.  As great as his glove is, the Phillies are desperate for offense.  Galvis' glove is certainly exciting, but Placido Polanco is not far removed from being a gold glove second baseman and still brings a .289 batting average and quality at bats to the team.

Phillies castoff Scott Podsednik is currently playing center field and leading off for the Red Sox.  Do you think they could use Shane Victorino in a Youkilis trade?

How is this for a lineup compared to the one now?

It's late. The Phillies have invested so much in this team, it would be a moral failure to let things collapse.  There is still way too much talent beyond any injuries for this team to be in last place.  The status quo is not working; it's time to make things work.