Philadelphia Phillies: Is It Worth Caring Anymore? 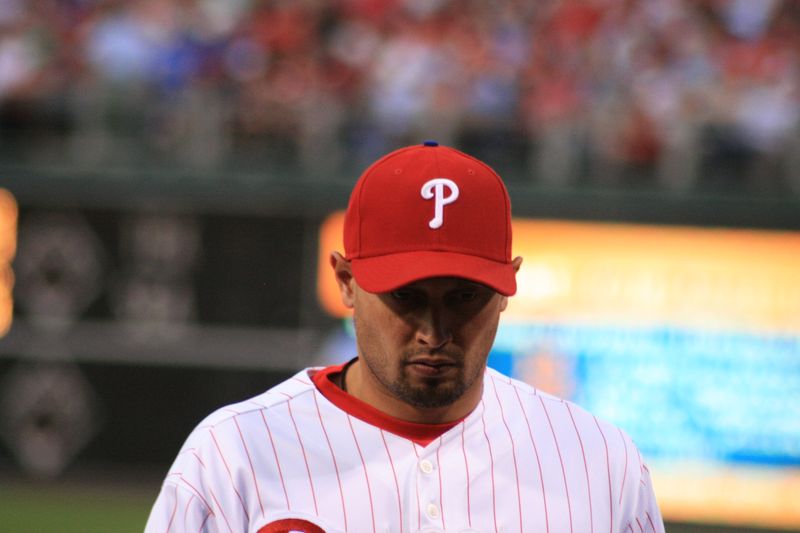 Photo: Philliedelphia/Frank Klose
In case you weren't sure enough that this group of Phillies is on the verge of total "sucks" status, last night they lost an 11-7 decision to the Twins in Minnesota. It was quite typical of the season. The offense showed up and put up a good game, but the starting pitching, bullpen, and defense of this team was so totally bad that they still lost.

The Phillies are a really amazing team. They are the best team in the league at hitting with two outs and runners in scoring position. They also are historically bad at situational hitting, somehow. This is exactly the kind of team where Cliff Lee can have no wins, but numbers that stack up with the best in the league. This might be the only team capable of that, to be honest.

For most of the season, I've sat here and said, "this team will be fine when ____ gets back." Well, let's examine that, shall we? Truth is, in Ryan Howard's four slot, they haven't been that much worse than him. Sure, I know that Pence and Chooch have been hitting there most of the time, and they are two of our better guys (and both would hit elsewhere with Howard here, making the full line-up better), but the point is that Howard won't fix things alone, even assuming he's 100%. As for Chase Utley, he got booed in Clearwater last night, he was so bad. I know it was his first game back, but ready to bet the house on him?

My point is, there isn't some savior walking in to save this team, at least amongst the major leaguers. Could the Phillies try Domonic Brown? Well, I've long advocated for that. I think his sitting in triple-A is pointless, especially when you're carrying around some virtually dead roster spots. I know that many people have said that Brown hasn't earned his promotion. To that, I point to a comparison with the first-place Nationals, and Bryce Harper:

Just in case you want to point to late last year, when Brown struggled, check out Harper's line in Harrisburg:

In other words, Harper was arguably worse in the upper minors, and still has gone up and hit around .300 so far. Should Harper fall off a cliff this season? Sure, his stats should drop far, but that is not the point. He's already helped that team, contributed to wins, and done more than a lesser talent could do in his spot. Brown could be doing the same thing, but isn't, because Ruben is covering for himself. He didn't trade Brown when he was considered a hyper-talented youngster.

Ruben, probably correctly, decided he was too talented. Then he brought him up and put him in a bench role that he was not adapted for, and he struggled. Now, Ruben's afraid to cut him loose and let him play, so we can find out if he will sink or swim in the majors. Would Dom Brown spark this team? I don't know. I also don't know that we're going to find out, let alone soon.

So what else is there to try? Well, you could try line-up changes. For instance, I think a slap-single hitting player like Juan Pierre would be a great EIGHT hole hitter, while Shane could definitely afford to hit in the two hole if we're going to keep him around. Heck, maybe he should even lead off- Jimmy sure hasn't been magical this season in the role. Until Utley's back, I don't know where you can hit Pence but third, but I see no excuse for Chooch hitting seventh last night. Even so though, you have to trot out a line-up with little threat from left field, a black hole at second base, Ty Wigginton and company at first, and Polanco virtually falling apart at third.

You could try a trade- but you probably have to send out a starter to do that. I'd be fine with sending Shane in a deal, since I would not pay him $60-75 million this off-season, in light of this team's needs and wants. Could you send him to Boston for Youkilis? Maybe, considering their issues, but should you? I probably would, but there's lots to be said for Youkilis' injury issues in recent years. Wouldn't he just add to our doctor bills?

Another guy worth considering the value of trading is Hunter Pence. I like Hunter- but I don't love Hunter. He's essentially turning into Jayson Werth for me. Good stats overall, good defensive player overall, but entirely not clutch, and makes stupid plays sometimes. Last night, the bloop single that rolled under his glove and put the man on third was one of the two emblematic plays of our season in that game (the other was the kid taking the foul ball from Fontenot, then the guy getting an RBI single on the next pitch). With Andre Ethier signing a five-year, $85 million deal, what will Pence want?

In other words, with such similar numbers, Pence is going to get paid, and probably better so than the slightly older, earlier signing Ethier. Pence would also fetch a good return, though trading him would be giving up on the season- something I can't quite fathom doing in June. With that said, I'm not sure I'd saddle this team with another big contract on Pence when, frankly, he's not an MVP caliber guy. Haven't we done this enough? With our budget in the stratosphere as is, wouldn't spending our money for future years more intelligently make us very tough to beat? I don't know, it makes sense to me.

So finally, do you fire Charlie or Ruben? Charlie was second-guessed for not using Papelbon on Sunday, which I know spurs debate. Due to the paper-thin abilities of our bullpen, I would have used him, since he was the best available guy, gets paid to get big outs, and was in an AL park (so going two innings has no drawbacks). With that said, we all know Charlie is not a great strategist in-game, but he's also not the problem. He pencils in the guys he has, which by the way, aren't so good right now. I mean he has a team with a collection of minor league relievers who aren't ready, Hector Luna, Mike Fontenot, John Mayberry Jr., Juan Pierre, Michael Martinez, and for a long-time a not-quite-ready Freddy Galvis or a not-so-good Pete Orr. So does this all fall on Ruben? I'll excuse him Halladay's injury, Lee's injury earlier, Howard's torn achilles, and even that Utley's not around (though he should have been all over him all off-season so he knew). I don't think he planned for an aging team though, at least not very well, and for that, we're now suffering through this. Would I fire either of these guys after the run this team has had? Probably not. I don't see what that would change. Do they deserve to walk-on-water anymore? No, we should start to consider them as mortals again, meaning their job status could change, like after the season.

When you consider all of the above, you have to finally consider one more thing: the five year run as the best team in the National League is over, maybe. This team is hardly done mathematically with the possibility of being a playoff team, but do they look like one to you? Do they feel like one? Does their newfound ability to find a way to lose, night-in, and night-out, make you think things will change? Should we at least entertain the thought of guys like Brown, Galvis, Tyson Gillies, and Cesar Hernandez possibly patrolling starting spots in next year's line-up at Citizens Bank Park, in a (gulp) rebuilding mode? I know there are huge problems with this thought- the big money still owed to Halladay, Lee, Howard, and Utley, as well as the impending free agency of Hamels, but it's strongly possible now. If this is our 1984, then we had a great run, and I'll always be grateful to this group. They gave me the only title I ever saw. With that said, I don't want the Phillies to age into an awful team with them. If we're going to be bad now, be bad and young, so we can start to piece together the next group.

All of this leads to a fundamental question for the fans: should we even care about this team if it falls out of contention? For me, this is an easy one. We've had a group of seven people, including my father and I, who have had season tickets together down the right-field line, where the wall comes down in foul ground, since 1991. I've sat through some crappy teams, and while I won't easily accept a 1998 Phillies version again anytime soon from a big-market club like this, I'm not going to stop watching over some bad baseball. I've seen much worse. It's in the best interests of the owners to get a winner back out on the field ASAP, in light of what they've seen from the fans in the last several years, and the impending TV deal, so I don't think we're going to see the 1988-1989 versions of the Phillies now. With that said, I'll probably still have a lot to say about the teams if they do turn into them.