Phillies Barely Hang On in 9-8 Win Against Minnesota 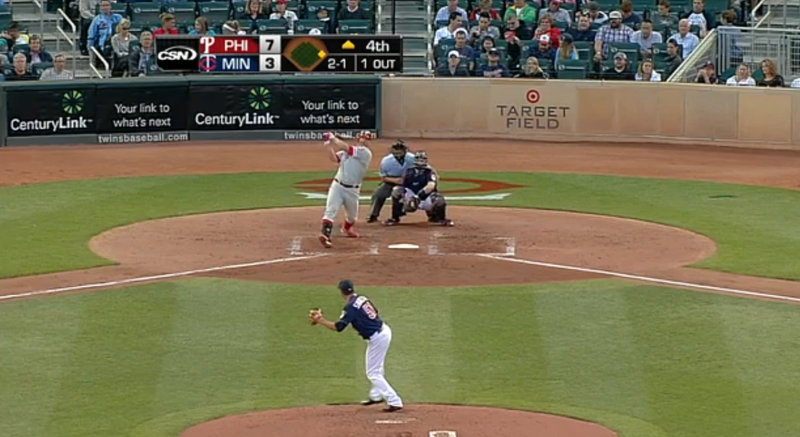 Well, this wasn't much of a step-up from last night to say the least. In what was one of the most painful games to watch, the Twins crushed the Phils' bullpen last night, taking game one 11-7. The Phillies were looking to even the series tonight with Cole Hamels on the mound and Placido Polanco back in the lineup.

Four straight singles from Jimmy Rollins, Juan Pierre, Hunter Pence, and Jim Thome would result in the exit of Twins starting pitcher PJ Walters. Thome's single scored Rollins and Pierre, while Walters was replaced due to a sore shoulder. Jeff Manship would be the long man out of the bullpen for Minnesota.

With one out in the first, Carlos Ruiz sent a single of his own to right field, scoring Hunter Pence. Thome and Ruiz were on base for John Mayberry, Jr. who crushed a ball to left field, pushing the Phillies' lead to 6-0. That's your first inning.

Trevor Plouffe put up the first run of the night for his team with a solo homer to left field. Plouffe went 3-5 last night with 3 RBI and a triple short of the cycle.

Mayberry doubled in his fourth RBI of the night with a double to left field, scoring Ruiz in the top of the third. 7-1 Phils.

In the bottom of the inning, Michael Martinez tossed a ball to Mayberry a little too far from the bag, allowing Jamey Carroll to score from third. Josh Willingham would ground out after that, sending home Ben Revere. 7-3.

The top of the fourth brought about one of the farthest home runs to ever be smashed at Target Field. Jim Thome sent an absolute "tater," as he would call it, to the concourse in center field, 466 feet away for his 606th career homer. 9-3 ballgame.

In the bottom of the sixth, Josh Willingham (who has been hitting the ball very hard of late) sent a solo home run deep into the night. But, not as deep at Jim Thome's ball. 9-4.

Brian Dozier doubled off of Hamels in the home half of the seventh. After Cole walked Jamey Carroll, Denard Span doubled to score Dozier. Hamels out, Antonio Bastardo in.

Ben Revere would keep it going with a single into left field to score Carroll, making it 9-6. Joe Mauer singled to right to score Span, followed by a strikeout to Josh Willingham. The runners advanced on a wild pitch, and Revere was able to score on a groundout from Justin Morneau. 9-8 game.

Chad Qualls struck out the side in the eighth, but Chooch dropped the third strike, allowing Jamie Carroll to get to first. This is where Jonathan Papelbon would come in for a four-out save.

The Phils had men on second and third in the ninth, but a run would not score thanks to a fielder's choice which was sent home, keeping it a one run deficit for the Twins. They also had the bases loaded for Michael Martinez, but you already know how that ended.

Jonathan Papelbon completed the four-out save with two strikeouts in the ninth and a fantastic over-the-shoulder grab by Martinez to win it for the Phils. Hamels got the win, his 9th of the season.

The finale of this series will be tomorrow at 8:10, it will be the rubber match of the series.