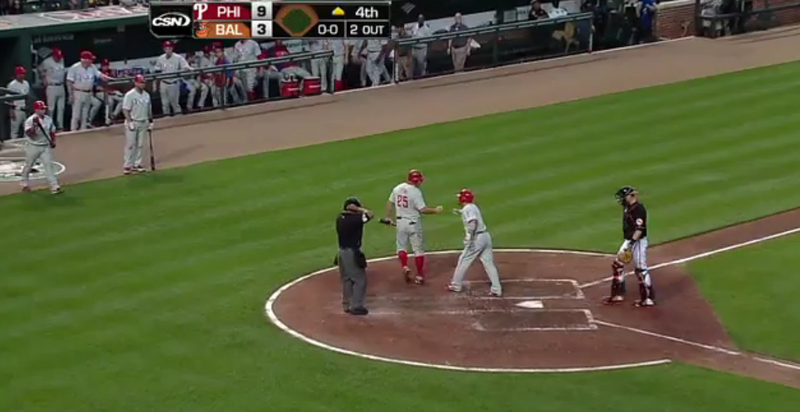 Another interleague series is underway between the Orioles and Phillies at Camden Yards. Joe Blanton, much like the Orioles started the season hot but has cooled off of late. Blanton has had four straight less than great starts, and was looking to have a better outing against Jake Arrieta.

This game would be a "doozy," as Chris Wheeler would say. The Phillies got ahead by seven runs in the first two innings. Where has this offense been in the past six games?

Hunter Pence scored the first run on a single to center from Victorino in the top of the first. In the second, Mike Fontenot scored the next two runs with a homer to the first row of the left field stands. Juan Pierre scored his 1,000th career run with a ground rule double from Thome, which was Thome's first RBI in a Phils uniform since 2005.

First baseman Chris Davis singled to center in the bottom of the second to score Matt Wieters, putting the Orioles on the board. Robert Andino doubled to left to score two runs, making it a 7-3 game.

Shane Victorino added to the hit fest with a two-run jack to right field, scoring two. One triple away from the cycle. 9-3 Phils.

Chris Davis sent a solo homer to the center field seats in the fourth, 9-4 game.

After Eric Chavez reached on an infield single in the bottom of the seventh, Joe Blanton was taken out for Michael Schwimer. J.J. Hardy took Schwim deep to left (and Schwim of course pointed up as if it were a pop-up) making it 9-6.

Antonio Bastardo pitched a marvelous inning in the eighth striking out three and walking one. He has been the most consistent arm in the bullpen this year other than Papelbon.

Jonathan Papelbon came in for the ninth for the first time at Camden Yards since the 162nd game of the season last year. To briefly recap that night, Papelbon (and Crawford) was responsible for the loss Boston suffered which kept them out of the postseason, while Tampa Bay came from behind to steal the wild card from them.

Well, it went a lot better than it previously had here. A quick inning from Papelbon led the Phils to a 9-6 win, the first win after a six-game losing streak. Sigh of relief.

Game two tomorrow at 4:05. Vance Worley will take the mound for the Phils.