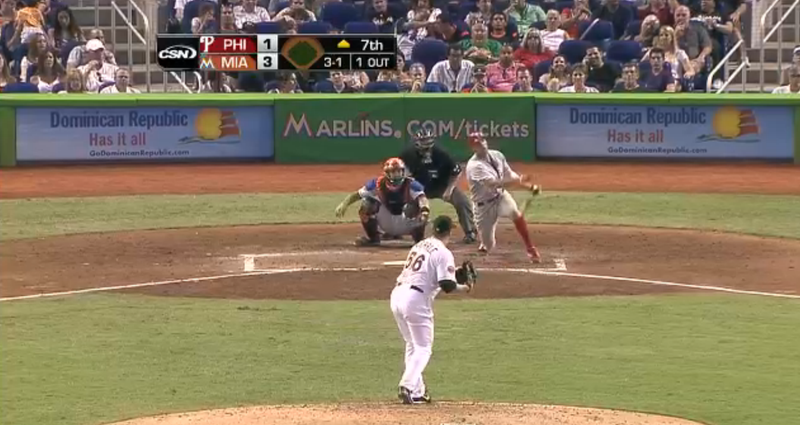 After a miserable game one last night in which the Marlins beat up Cliff Lee, the Phillies were looking to gain some ground in the N.L. East with the Braves and Nationals playing each other this afternoon. Cole Hamels looked to continue his excellent season against Mark Buehrle who pitched seven scoreless in his last outing.

Giancarlo Stanton got the party started with a solo home run to left field, igniting the Marlins' home run statue, hypnotizing fans and putting on a show. 1-0 Fish.

In the top of the second, Carlos Ruiz was able to score on a sacrifice fly from Shane Victorino. Tied game.

Jose Reyes scored in the third on a single from Stanton, putting the Marlins up 2-1. In the fifth, Reyes scored again, this time on a bases-loaded sac fly from Justin Ruggiano. Like Omar Infante's sac fly last night, Ruggiano's would have been a grand slam anywhere else. 3-1 Miami.

Hunter Pence brought the Phillies within one run in the seventh with a solo home run to left-center field. His second homer in as many days.

Cole Hamels was taken out after seven innings and 104 pitches. He allowed three earned runs on seven hits, walking three and striking out five.

Michael Schwimer had runners on the corners in the eighth but got out of the inning with a fabulous play by Placido Polanco at third base.

Heath Bell closed it out for the Marlins after giving up a double to Carlos Ruiz. Phils drop another, 3-2.

Afternoon game tomorrow in the finale of this series. The Marlins have a shot to sweep the Phils with Ricky Nolasco on the mound against Joe Blanton.