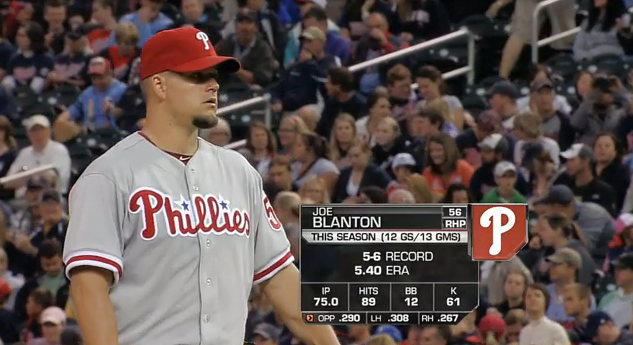 It's pretty sad that it's almost July and the Phillies are still in last place. Sitting six games under .500 (34-40) and sitting 9 games behind in the NL East, it's really tough to see this team accomplishing anything great this season. The Phillies are coming off of a 2-1 series loss against the Rays, including being swept in yesterday's day-night double header. The Phils are finished with Interleague Play for the year, ending with a 5-10 record against American League teams. Tonight the Phils are set to open up a four-game set with the Pittsburgh Pirates (38-33) to cap off their 10-game home stand.

Joe Blanton (6-6, 5.04 ERA) will make his fifteenth start of the season tonight as he takes on the Bucs. Blanton has been stuck in a rut for quite a while now. Over his last eight starts (41 1/3 innings), Blanton has allowed 16 home runs. Blanton has also has allowed five or more earned runs in six of his last seven starts to give him a 7.44 ERA. In his last start, on Wednesday against the Rockies, Blanton allowed five earned runs on six hits over seven innings, taking the no-decision in the Phillies' 7-6 win. Blanton made a relief appearance against the Pirates back on April 7, taking the loss after allowing an earned run through 2/3 of an inning. In his career, Blanton is 1-1 with a 3.29 ERA against the Bucs.

On the hill for the Pirates will be the righty Jeff Karstens (0-1, 4.50 ERA), who is making his first start since April 17. Karstens has been on the DL with shoulder inflammation and a hip-flexor tweak and after throwing a bullpen session on Thursday, he says he feels great. In his last start, way back in April against the D-backs, Karstens left after just one inning due to shoulder issues. Karstens made one start against the Phillies this season as well. On April 7, Karstens tossed six innings of one-run ball, allowing five hits and striking out two to get the no-decision. In 32 career innings pitched against the Phillies, Karstens has an 0-0 record and a 3.09 ERA.

Chase Utley could be back with the team by Wednesday if all goes well for him in Lehigh. Yesterday, it was reported that Utley would continue his rehab in Triple-A Lehigh and could be activated on Wednesday. Utley hasn't played all season and went 5-for-32 (.156) with one extra-base hit (a home run), five RBIs, three walks, five strikeouts and one stolen base in nine games with Class-A Clearwater.

Utley was working out at Citizens Bank Park this afternoon.