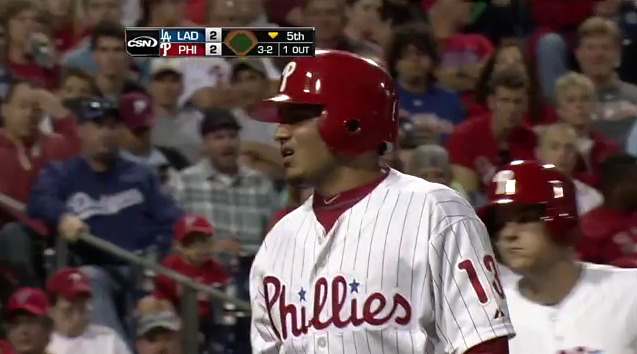 According to numerous reports, Phillies second baseman Freddy Galvis has been suspended by MLB for 50 games after testing positive for a banned substance. According to Todd Zolecki, Galvis tested positive for a metabolite of Clostebol, a performance enhancing substance.

Galvis had this to say about the test.

"A trace amount of a banned substance – 80 parts in a trillion – was detected in my urine sample. I am extremely disappointed in what has transpired. I cannot understand how even this tiny particle of a banned substance got into my body. I have not and never would knowingly use anything illegal to enhance my performance. I have always tried to follow the team's strength and conditioning methods, listen to the trainers, work out hard and eat right. Unfortunately, the rules are the rules and I will be suspended.

“I'd like to apologize to my all my fans, especially here in Philadelphia and back home in Venezuela, to my teammates and to the Phillies organization. I am looking forward to putting this behind me, rehabilitating my back and returning to the Phillies as soon as possible to try to help them win another World Series.”

Why he tested positive is a mystery. It could be a faulty test, or Freddy Galvis could be a complete freaking moron.

Galvis' suspension will begin immediately. Although it won't make a difference, since you know, his freaking back is broken.

We'll keep you updated as soon as we catch wind on this story.