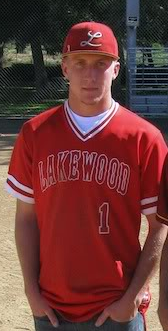 The Yankees blog River Avenue Blues had this scouting report on Watson:

Listed at 6-foot-4 and 200 lbs., Watson’s bread and butter pitch is one of the best curveballs in the entire draft. It sits in the upper-70/low-80s with sharp break and he has the ability to throw it for strikes or bury it in the dirt for swings and misses. His fastball usually sits in the low-90s and he’s shown the ability to hold his velocity deep into games. He’s also flashed 96-97 in showcase events. Watson throws a changeup and a cutter but both need a lot of work. He has a clean delivery but must work on overall consistency, typical high school stuff. Watson’s athleticism and competitiveness are considered pluses as well.

Watson is committed to USC.

His first pitch, a fastball registering in the upper-to-mid 90's, backs the batter off the inside portion of the plate. Strike one!

An off-speed offering in the low-80's on the opposite side follows and essentially freezes the opponent in his tracks. Strike two!

Up next: Watson unveils a cut-fastball from his repertoire and the tricky movement confuses his counterpart. Strike three!

Three pitches. Three strikes. Another batter retired by Watson. The scenario has played on numerous occasions this season, seemingly too many to count. He possesses a well-rounded stable of pitches that few of his peers from around the country can match.