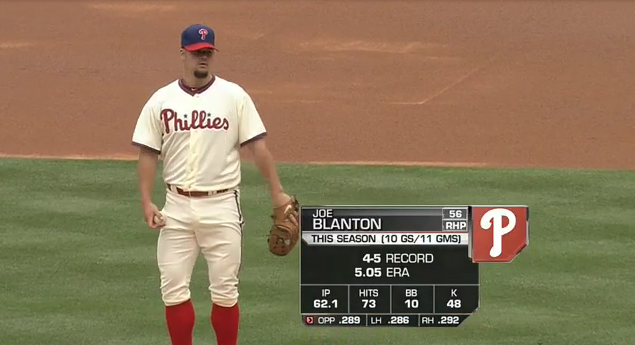 The Phillies will look to erase the recent sweep by the Dodgers tonight and this weekend as they embark on an eight-game Interleague Play road trip. Having lost six straight games to end their depressing home stand, maybe a little Interleague Play for the Phils will be able to fix that – hopefully. Tonight, The (28-31) Phillies will head down I-95 to open a three game set with the (32-25) Orioles. Joe Blanton (4-6, 5.27 ERA) will get the nod against Jake Arrieta (2-7, 5.53 ERA) in the series opener.

Joe Blanton has recently been everything he wasn't in the beginning of the season. In his first seven starts, Blanton went 4-2 with a 2.81 ERA, but in his past four Blanton is 0-3 with a 10.59 ERA and has allowed 10 home runs. Most recently, against the Marlins on Sunday, Blanton gave up five earned runs on nine hits through 6 innings while striking out six and walking one. Blanton took the loss, his sixth of the season and with that he has not won a game since May 14th. In his career, Blanton is 1-2 with a 5.09 ERA against the Orioles. The current Orioles players are hitting a collective .419 (18-for-43) in their careers against Blanton. Great.

The O's are sending out righty Jake Arrieta (2-7, 5.53 ERA), who is attempting to save his spot in the rotation. Arrieta has gone 0-5 with a 7.96 ERA in his past six starts and most recently lasted just 4 2/3 innings against the Rays. On Sunday, Arrieta allowed four runs on two hits while striking out three and walking four Rays. Arrieta's only wins came on Opening Day (April 6th) and May 2nd against the Yankees. In his career, Arrieta has never faced the Phillies.

Although Arrieta has never faced the Phillies as a team he has faced Laynce Nix, Juan Pierre, and Jim Thome. Nix is on the DL, so expect Pierre to be in the lineup today and Jim Thome in the DH spot. Today's game is at an American League park so Charlie can use one extra batter. Thome is making his first start for the Phillies since April 22 against the Padres.

What not to expect is to see Polly at 3B tonight. After being spiked by Dodgers catcher Matt Treanor, Polanco has been unable to swing a bat.

The Orioles also lead the all-time regular-season series against the Phillies, 24-21, since the introduction of Interleague Play in 1997.