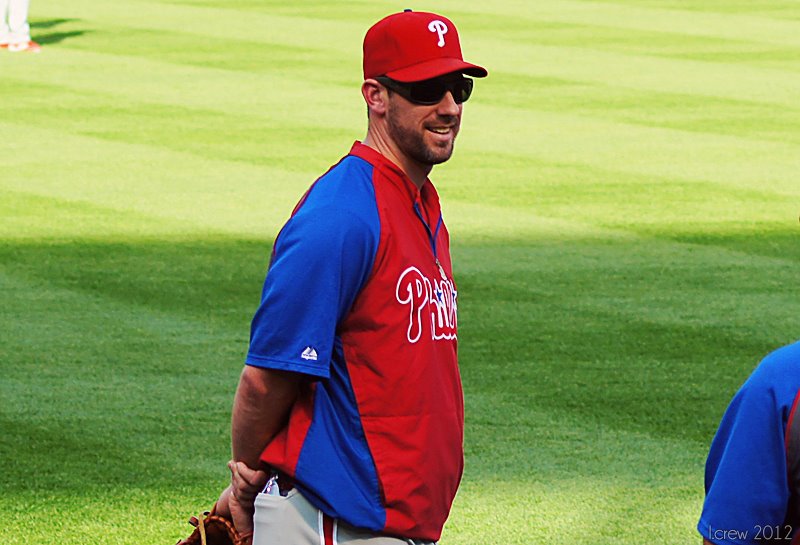 After Friday's washout against Tampa Bay, the Phillies found themselves facing their first doubleheader of the year.   This is also the Phillies first opportunity to take advantage of a new opportunity afforded to teams in the new Major League Baseball collective bargaining agreement.

Teams that have a day-night doubleheader may add a 26th player to the roster for one day.  That player must be a member of the 40-man roster before being added to the roster.  That player may be optioned back to the minors afterwards and is not subject to regular rules surrounding that player's recall later.  The Phillies are going to need a pitcher, so this could be a great opportunity.

The Phillies plan to start Cole Hamels in Sunday's 1:05 p.m. opener and use Friday's starter Cliff Lee for the nightcap at 6:35 p.m.  In doing so, the Phillies are not using the new CBA rule to their best benefit since the team must add a starter to keep the rotation on regular rest.

The rotation shapes out as follows:

Kyle Kendrick cannot start Wednesday and maintain normal rest.  It's hard to believe that the Phillies would use Kendrick or any other Phillies starter on short rest since there is not a day off until Monday July 2.

So who will start?

Scheduled to go for the Iron Pigs on Wednesday is Tom Cochran.  The lefty Cochran is 5-1 with a 3.53 ERA for the Iron Pigs.  Cochran has not been considered much more than AAA inventory, so it would be a surprise if the Phillies recalled him to start Wednesday.  It remains a possibility, but the Phillies would have to find room on the 40-man roster.  That should not be too hard, since both Michael Stutes and David Herdon could be moved to the 60-day disabled list.

Where the Phillies went wrong is not using the extra one-day roster spot on a starter for Sunday's doubleheader.  Options could have included Saturday's Iron Pigs starter Tyler Cloyd, who is 7-1 with a 2.37 ERA and Scott Elarton, Sunday's starter, who is 5-4 with a 4.32 ERA.  Elarton has come back down to earth after a hot start, but Cloyd has been most impressive for Lehigh Valley.   Hamels, Blanton, and Worley could all have been pushed back a day.

Instead, it appears that for their 26th man the Phillies will summon a body from AAA that will take up space in the bullpen.  This AAA body will not solve the problem of who will start on Wednesday, leaving the team to probably use Raul Valdes, Joe Savery, or Michael Schwimer in what will probably be a game piecemealed by a handful of relievers, hoping to get lucky and get three innings out of one or two of them.

The end result is that the Phillies will have an overworked bullpen later in the week when they could have gotten a spot start from one of their promising arms from AAA on a one-day trip down the Northeast Extension.