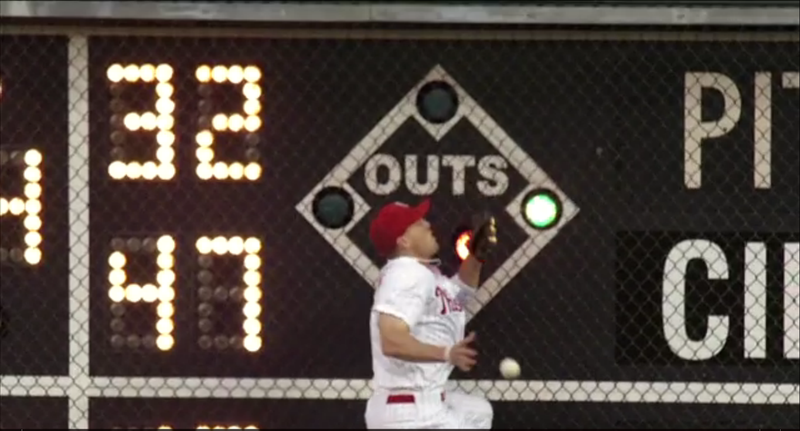 This is getting painful. The Phillies can't score runs when they need to, and boy did they need to tonight. Kyle Kendrick would get the start tonight against Chris Capuano, hoping to bring the first win of this series.

Shane Victorino kicked off the second inning with a solo home run to left field (remind Shane to always bat right-handed) putting the Phils on the board.

The Dodgers would put up two on the board in the third inning. Tony Gwynn tripled to right (Pence dropped the ball and glove, appeared hurt but stayed in the game) which scored Adam Kennedy. Gwynn scored on an error from Mayberry, which left Chris Capuano safe at first.

In the fifth, Wigginton jacked his sixth homer of the season into the left field seats, tying the ballgame at 2. Freddy Galvis was taken out of the game in the same inning with some lower back issues. Mike Fontenot replaced him at second.

After Fontenot walked, Jimmy Rollins sent a ball deep into the night in left field, putting the Phils up 4-2.

After Kendrick struck out Andre Ethier, he gave up a single to AJ Ellis and a double to James Loney. Tony Gwynn was intentionally walked, and Jerry Hairston walked to bring home a run. Kyle was taken out after that, and was replaced by Raul Valdes.

Valdes gave up a single to Dee Gordon which scored Loney and Gwynn, giving the Dodgers a 5-4 lead.

Antonio Bastardo came in for the top of the eighth in a 5-4 game. He would keep it that way, thankfully. The Phillies could still win this, but seeing how they've been performing offensively of late, I question whether they will actually try to or not.

Well, Jake Diekman walked the bases loaded in the ninth, which is what Kendrick had previously done. After LA took a 6-4 lead, Michael Schwimer would come in and retire the side.

In the bottom of the ninth, Carlos Ruiz was hit by a pitch, and later scored on a double from Ty Wigginton. This would bring up Jim Thome to pinch hit in his first at-bat back from the DL. Thome struck out swinging to bring up Fontenot who walked. Brian Schneider popped up to follow, ending the ballgame.

Tomorrow's game will be a day game at 1:05, Cole Hamels vs. Aaron Harang. Get out your brooms.