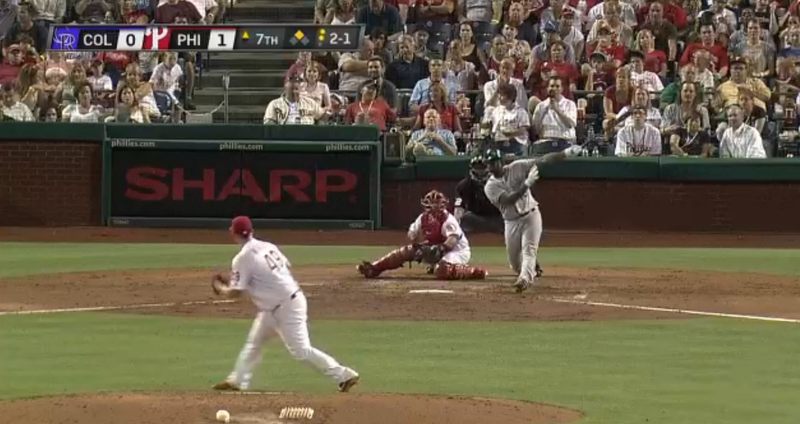 Just another one of those games on a sweltering June night. As big of a problem as situational hitting is for the Phillies, it seems to be getting worse as the season progresses. Vance Worley isn't a big fan of the heat and humidity, as seen in his dripping-wet pitcher's goggles. Despite the heat, Vance was able to pitch a fantastic ballgame, which unfortunately wouldn't result in a win.

Jimmy Rollins led off the bottom of the first with a solo shot to left field, his fifth of the season. 1-0 Phils.

We would witness a 1-0 game up until the top of the seventh inning when Chris Nelson slammed a two-run jack to the first row in left field. 2-1 Rockies.

Chad Qualls came in for the eighth inning and allowed two singles before being replaced by Jake Diekman. Diekman ended the inning with a strikeout to Michael Cuddyer, keeping it a 2-1 game.

The Phils couldn't tie or take the lead in the eighth inning after Ty Wigginton pinch-hit a lead-off double to right-center.

It wouldn't have mattered anyway, because Wilin Rosario sent a Michael Schwimer fastball to the seats in right field with Todd Helton on base. 4-1 Colorado.

You know the rest.

The Rockies leave town after tonight, and the Tampa Bay Rays come into town to start a three game series. They'll send James Shields out against Cliff Lee.