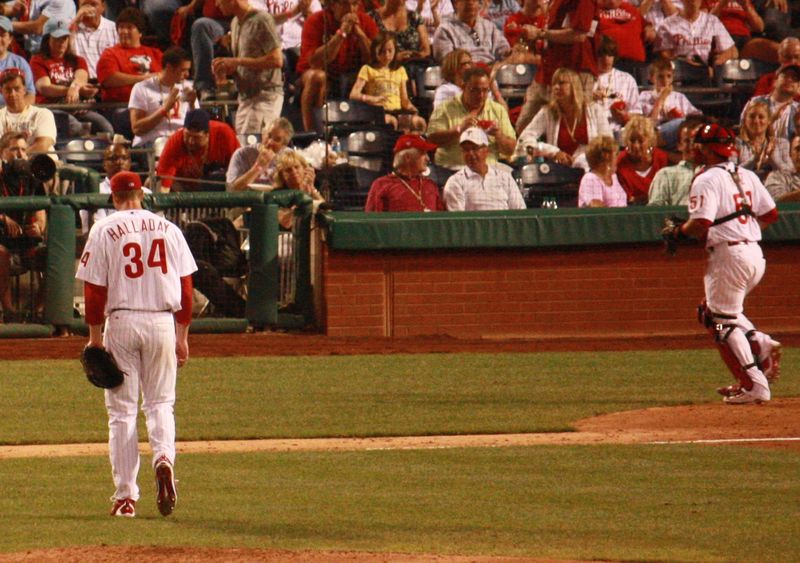 Roy Halladay has been out for two weeks since leaving his start against the Cardinals early on May 27. The Phillies are 4-10 since then. (Philliedelphia/Kevin Durso)
When Roy Halladay joined a crowded DL two weeks ago, the Phillies had to know they were in for the biggest test of their five-year reign in the NL East.

Since that time, the numbers aren't pretty for a team that thrives on starting pitching and includes Cliff Lee and Cole Hamels.

Last week, when Halladay held a press conference to address his recent injury and being shut down for three weeks so it could properly recover, there was one quote that would prove to be important to the team. It also is a haunting quote based on the team's status now.

"I don't feel like anyone's run away with the division. I'm optimistic. We've got the guys that can overcome this."

That was Halladay a week ago. The Phillies were five games back in the NL East in the middle of a four-game losing streak. Their last win, five days prior, had pushed them within 2 1/2 games of the NL East lead all without leaving last place. In the week since, the Phillies are 1-5. They have dropped 4 1/2 additional games in the standings to fall to 9 1/2 back, their largest deficit since the end of the 2006 season.

The Nationals aren't running away with the NL East by any stretch. But they are running away from the Phillies.

Those words now serve as a haunting reminder. The division, and five-year reign, are slipping away quickly. A fan base is quickly losing optimism. And the reason is because the guys they have are not overcoming this.

It may go down as the symbolic quote of the season, because the second he said it, the Phillies slipped further into a deficit until it reached what feels like astronomical territory.

It certainly would take a miracle for the Phillies to somehow rally to win the division or even make the playoffs without the help of Halladay, Chase Utley, Ryan Howard and the countless others that have served some time on the DL or are playing injured. Perhaps the team that had so many miracles in them during the latest era of glory is finally running short on them.