Eagles Flyers Phillies Sixers About Us Write For Us
Jim Thome Traded to Baltimore for Single-A Players Gabriel Lino and Kyle Simon
After Drug Suspension, Jason Pridie Gets New Life With Phillies 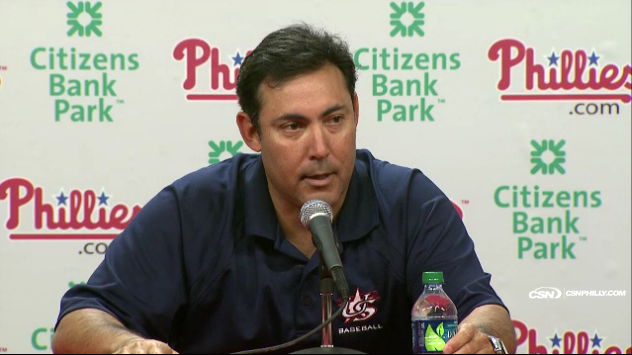 Well, that's it.  Ruben Amaro has given up on the Phillies for the 2012 season.   In case you did not pick that up by a lack of moves when things went wrong, his trade of Jim Thome to the Baltimore Orioles for nothing that would help this 2012 club shows that it is over.

The Phillies record this year is an indication of what Amaro did or did not do for the club.  Now let me be very clear: I do not blame Amaro for all the injuries.   But, he has made a number of key mistakes that brought the team to the point where they are trading from a position of strength for nothing that helps the team's immediate needs.

The Bullpen Was Never Assembled to be a Strength

Ruben Amaro contructed a bullpen that was to look like this:

But, never did Amaro add a second left-handed reliever.  That is, unless you count the two-week trial that Dontrelle Willis got that clearly was not meant to be from the start.  Ironically, the Phillies would have four left-handed relievers at times: Bastardo, Raul Valdes, Joe Savery, and Jake Diekman.

Chad Qualls has not been an effective reliever in years.  In 2010 Arizona had to release him after he got through two-thirds of the season with an 8.29 ERA.  After being picked up by Tampa Bay he improved; his ERA was only 5.29 with the Rays.  2011 in the cavernous PetCo Park of San Diego, Qualls put together a season that looked okay on paper, a 3.60 ERA.  But - look at the numbers closely, you'll see that Qualls had a 5.05 ERA when he was not in PetCo Park.  He had a 33.75 ERA at Citizens Bank Park in 2011.  Qualls was a late addition for just $1.1 million, meaning other teams noticed how bad he was.  But, Amaro had to know that the Phillies had no reliable 8th inning reliever, since Jose Contreras would not be reliable.

Ah, Jose Contreras.  For some reason Amaro gave him a two-year contract after 2010.  I am not sure anyone believes his age is the one in the media guide, mostly because he pitched like an older player all along.  In 2011 Contreras pitched a whole 17 games.  He actually pitched just as many in 2012.  Another reliever got his opportunity when Contreras hit the disabled list in April 2011: one Michael Stutes.

Mike Stutes burst onto the scene in 2011, dominating hitters in initially the 7th inning.  But as Ryan Madson became the Phillies' closer, Stutes got some 8th inning work in tandem with Antonio Bastardo.  Stutes had a 0.00 ERA in April, a 2.89 ERA in May, and a 3.14 ERA in June.  But, starting in July he started giving up more and more runs.  Stutes had a 3.75 in July and then ballooned to a 5.84 in August.  He was leaking oil.  He was still very talented, but it was clear that young Stutes was not ready for a prime-time bullpen role.  After an injury-riddled Spring Training, Stutes surprisingly made the Opening Day roster, and six appearances later, was done for the season.

I was one of David Herndon's biggest detractors during his Rule 5 stay and early last season, but Herndon put together a very respectable season in 2011.  He is sorely missed; I do not feel that Amaro could have forseen this injury.  In the case of Qualls, Contreras, Stutes, and the lefty he never acquired, I blame Amaro for counting so heavily on them.

The Phillies suffered really crippling injuries to Chase Utley and Ryan Howard.  Exacerbating the situation was the injury to Laynce Nix.  It's amazing how much the Phillies miss Laynce Nix right now.  The Phillies have gone a season's worth of games without a left-handed power bat when you factor in the injuries to Howard and Utley.  Utley is back, and Howard is forthcoming.  But Amaro's response to left field set up this situation.

While people said frequently that Raul Ibañez was old, and blah blah blah...the Phillies never did replace Ibañez's 20 home runs and 84 RBI.  Amaro's response to filling the gap was to let John Mayberry and two veterans on the downside of their career battle it out to play for cheap.  Mayberry never proved to be a starter and Mayberry has proven he is not a starter.  While there is no denying Pierre's contributions, he is a table setter and not a producer.  He can hit all the singles and steal all the bases he wants, if there is no one to drive him in, does he really help?

Amaro carried table setters Polanco, Victorino, Rollins, and Pierre, most of the time always in the same lineup.  Who was going to drive them in?  Sometimes Carlos Ruiz and Hunter Pence sometimes have, but there is hardly any power otherwise.  With Utley and Howard out, the Phillies had to have some power in left field.  Amaro failed to do so.

No Moves Made, Other than to Subtract

So, half-way through the season with gaping holes on the Phillies, Ruben Amaro has only done two things:  created a shuttle bus that goes back and forth to Lehigh Valley to cart AAA relievers back and forth, and traded Jim Thome, adding nothing to the major league roster in return.   While I have full confidence in Director of Player Development Joe Jordan and the players the Phillies acquired in this trade, they are not for right now.   If Thome was traded for a reliever, I might have believed that the Phillies were still trying to win in 2012.  He was not, and I feel Amaro has given up.

Things go wrong.  It's up to the General Manager to respond.  Amaro has sat on his hands and done nothing to help the team that maxed out its' payroll to win and the team is on pace to finish 20 games out of first place.   The Phillies are on pace to win 74 games and the Nationals on pace to win 94 games.  If the Phillies played as well as the Nationals the rest of the way at that .579 clip, they would still finish 10 games out and with 83 wins.

So, Amaro realizes he has dropped the ball and sold off Jim Thome.  More are coming soon.  The white flag has been waved.