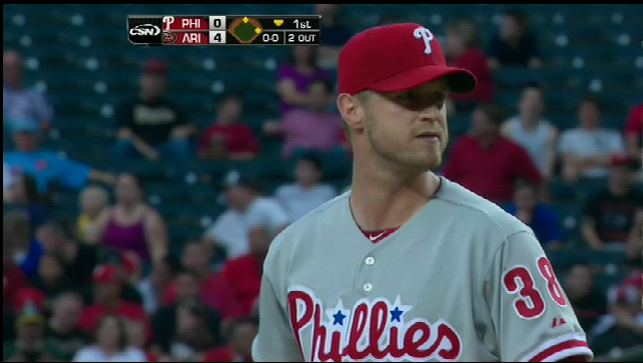 I'm feeling lucky today. My high school graduation practice went smoothly, I avoided a car accident on the way home and I won $3 from the lottery. The only thing that blows is that I could be at this game, but I couldn't get off of work. Hopefully most of my luck is with Kyle Kendrick and the Phillies tonight when they host the second place Miami Marlins.

The Marlins (29-22) are 1/2 game back behind the Washington Nationals in the NL East while the Phillies (27-25) sit 3 games back in last place. The Marlins are on a three game win-streak and look to continue that streak as they come into Philly tonight.

Kyle Kendrick (1-4, 4.10 ERA) will be making his seventh start of the season tonight as he takes on Miami. Kendrick is also coming off of what is most likely his best performance of his career. On Saturday against the Cardinals, Kendrick tossed a seven-hit complete game shut out to earn his first win of the season. K.K. walked none and struck out four in his second career complete game (first shutout). Although his numbers don't show it, Kendrick has been more effective this season than he is credited. In his last three starts, Kendrick is 1-1 with a 1.23 ERA. K.K. has not pitched against the Marlins yet this season. In his career, he holds a 7-2 record with a 4.39 ERA.

Opposing the Phillies will be Marlins' lefty Mark Buehrle (5-4, 3.26 ERA) who is coming off an impressive outing. On Saturday, Buehrle tossed 7 1/3 innings of two-run ball against the Giants to earn his fifth win of the season. Buehrle walked none and struck out three while the Giants scattered eight hits off of him. Back on April 12, Buehrle allowed three runs on eight hits through 6 1/3 innings in a losing effort against the Phillies. In his career, Buehrle is 3-1 with a 4.88 ERA against the Phils.

The Phillies were able to break out late against the Mets in their last series. Scoring with men on base has been a struggle for the Phils all year, but if they can get to Buehrle early and scatter a couple of hits with men in scoring position the Phillies can surely back up Kyle Kendrick if he is spot on again.

Shane Victorino is out of tonight's lineup.  This is Victorino's first game off of the season.  He has played every inning of every game so far.