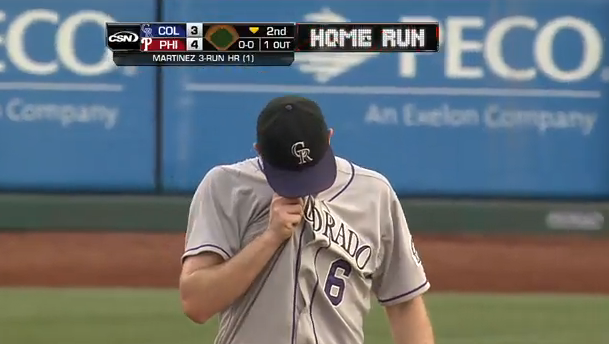 In what might be the dumbest move that Major League Baseball has seen since the first and second time they thought a baseball team would work in Florida, the Colorado Rockies have gone to a four-man pitching rotation that will be limited to 75 pitches each start.

We all know the magic number of pitches before a pitcher's arm falls off is 100 every fifth day.  So in their brilliant logic, 75 every four days means the precious arm will be safe.  Instead of a fifth starter, the team gets an 8th guy in the bullpen.  Now let's do a little math.

Pretty standard start is 6 innings, 100 pitches.  Maybe the bullpen throws 50 over those last three innings.   Now, these pitchers will get pulled in the 4th inning, as we saw last night.  So, the bullpen with one extra guy must do 50% more work than usual, pitching the whole second half of the game.

Can one extra bullpen arm really account for the 25 extra pitches every single day?

Oh, and the four pitchers the Rockies have in the rotation all suck: