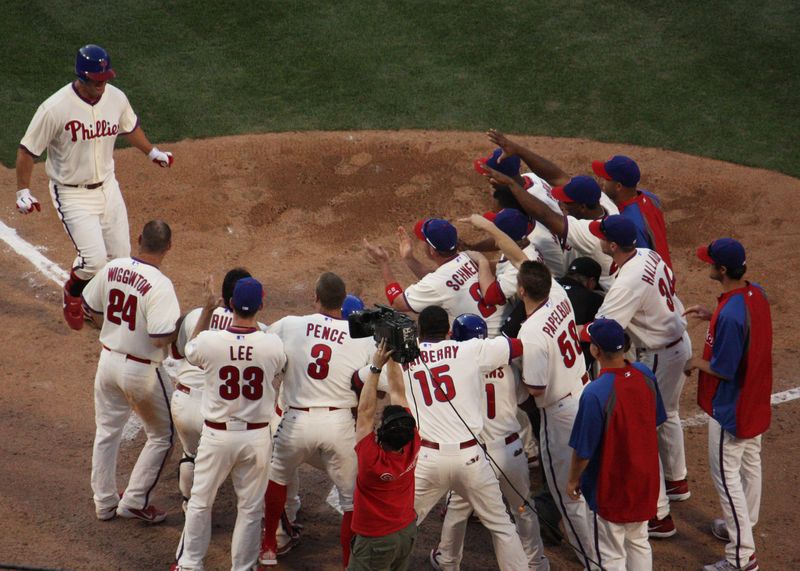 Antonio Bastardo allowed just one run in a bases-loaded, no-out jam. That kept the Phillies lead intact going to the ninth. That usually means game over for the Phillies. For Jonathan Papelbon, perfection came to an end.

Papelbon couldn't close things out for the first time as a Phillie, and when he couldn't he made a bet. First one to end the game gets $5,000. It didn't take long to end it.

May thought that Jim Thome's Phillies career was over after road trips featuring interleague play ended. He was always going to be a good DH for some American League team, and it was better if they didn't have him on the bench. Thome said he would adjust to the role.

Today, payoff finally came for the 41-year-old class act that is Thome. He played hero in a game that finally pulled the Phillies from the cellar.

The Rays jumped on Kyle Kendrick in the second with three runs. Two scored on Jeff Keppinger's double. Another came in on an RBI groundout by James Shields, the opposing pitcher.

But Shields wasn't his usual self on this day. He struggled with command, and walked Kyle Kendrick to  open the third. Jimmy Rollins made him pay with a two-run home run that brought the Phillies back into the game.

One inning later, other Phillies got the chance to make an impact. For Juan Pierre, this was his best game as a Phillie. He really made it memorable with a three-run home run in the fourth to give the Phillies the lead.

The Phillies also added another run in the seventh on a Carlos Ruiz RBI single.

But the Rays had plenty of chances against the Phillies' shaky bullpen. Kendrick only lasted four grueling innings. He allowed three runs (two earned) on six hits. He walked three and struck out six. Raul Valdes was brilliant through two innings allowing just one hit and striking out four. Even Chad Qualls and Bastardo, who finished the seventh, pitched the inning painlessly.

Bastardo's eighth was different. Three straight singles loaded the bases. A one-out single scored a run. But Bastardo struck out two in the inning and closed it with a fly out to right, keeping a two-run lead for the Phillies going to the ninth.

Jonathan Papelbon wasn't doing anything we hadn't seen. He allowed the tying run to come to the plate with one out. He had two outs with the tying run still needing a longball to do the ultimate damage.

Then, he couldn't finish it.

But a hero was waiting. Jim Thome emerged from the dugout and was to lead off the ninth as a pinch hitter. It was Thome's one all-or-nothing at-bat of the game. He got it all. 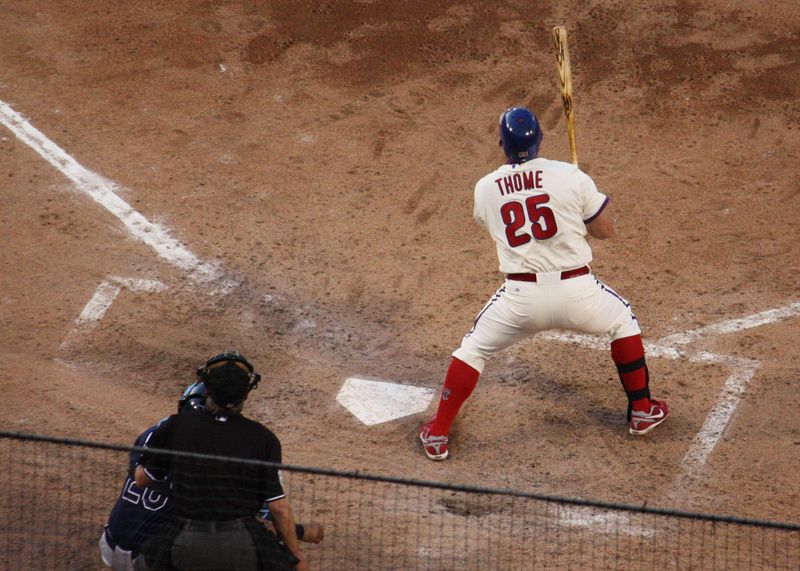 Thome's home run helped the Phillies rebound from Jonathan Papelbon's first blown save of the season in their 7-6 win over the Rays. (Philliedelphia/Kevin Durso)

Thome belted a 3-2 pitch to left that was a no-doubter. The celebration was on as Thome made history. It was his 13th career walk-off home run, a new major-league record passing Jimmie Foxx, Mickey Mantle, Stan Musial, Frank Robinson and Babe Ruth.

It was his first home run in Citizens Bank Park since rejoining the Phillies. It was his 609th career blast, tying him for seventh all-time with Sammy Sosa. It also secured manager – and Thome's good friend – Charlie Manuel's 900th career managerial win. This was more than just a game-winner. This was historic.

But the 7-6 walk-off win did more than just start a celebration. For the first time since the first week of the season, the Phillies are not in last place. They jumped over the Marlins, who lost earlier in the day to the Blue Jays, for fourth place.

It felt like a trip back into time nine years ago when Thome was in his first year with the Phillies. His blast was majestic, exciting and gave you chills.

The game as a whole seemed to somewhat sum up the season. A roller coaster of emotions, from the lows of Kendrick's early struggles to the surprise of a Juan Pierre home run – to put that in perspective you have to go back to August 21, 2004 to find his last home run that wasn't a solo shot – to the bullpen's latest meltdown featuring the reliable closer to the heroics of a sure-fire Hall of Famer.

It's hard to say what the future this season will bring, but if that's the way it will feel when it ends, I think we'd all take it.

In the near future though, the Phillies need some great starting pitching tomorrow. The bullpen worked a lot harder than I'm sure Charlie Manuel wanted. That means Cole Hamels and Cliff Lee already have their work cut out for them.

But, for now, enjoy the victory. It may be the best and most satisfying win this season.

The Phillies are back in action for a day/night doubleheader tomorrow against the Rays. Cole Hamels faces David Price in the first game. Cliff Lee goes against Alex Cobb in the second.