Vance Worley Looks To Keep Phillies On Track Against Orioles 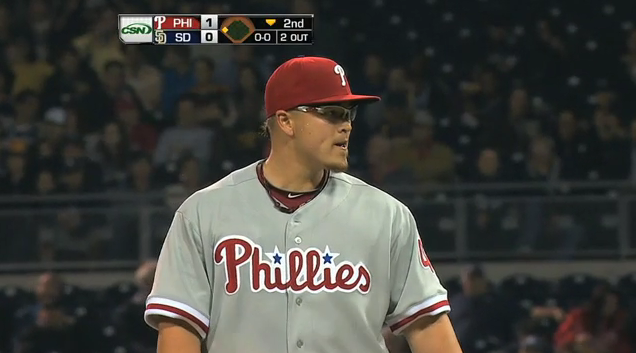 The Phillies finally won a game last night as they bested the Orioles, 9-6 to take game one of this three game set. The bats broke out pushing across nine runs on 12 hits, giving enough cushion room for Joe Blanton to get the win.

Today, Vance Worley (3-2, 3.38 ERA) will make his second start since returning from the DL. Worley was a bit rusty in his last start, but given the fact that he was shut down for nearly three weeks, I'd say give him time to ease back into the groove. In his last outing, on Monday against the Dodgers, Worley was limited at 80 pitches. He allowed three earned runs on five hits and walked three while striking out four. Worley took the no-decision, but the Phillies ended up losing the game. Worley has never faced the Orioles in his career and hopefully today he can leave a lasting impression on them.

For the Orioles it will be Tommy Hunter (2-3, 5.59 ERA) who is coming up from AAA-Norfolk. In the majors this year, Hunter has allowed 69 hits in 58 innings with 14 walks and 31 strikeouts. After Arrieta's poor performance last night against the Phils, Buck Showalter was forced to use Dana Eveland as the long-man in the 'pen. Eveland is not available today, so Hunter was called up in the meantime with a roster move yet to be made. Hunter's last two starts were against Toronto and Boston, Toronto being his last decision, which was a loss. Opponents are batting .301 against Hunter this season, so hopefully the Phils' offense can get to him this afternoon.

The Phillies will be without second baseman Freddy Galvis for a while. Galvis, who was put on the 15-day DL with a lower back strain could possibly have suffered a Pars Fracture. Look for Mike Fontenot and Michael Martinez to switch off at second base.