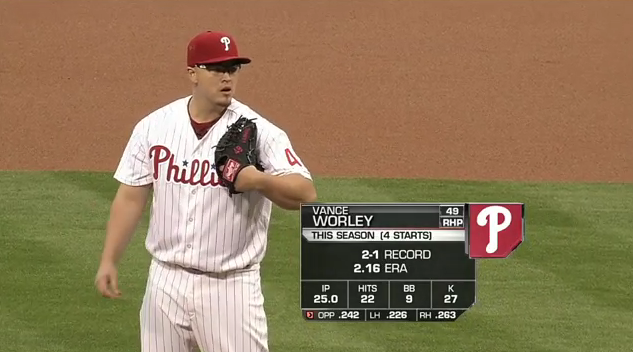 Vance Worley (3-2, 3.07 ERA) has missed action for the past three weeks and today he'll return to the mound to open up a four-game set with the Los Angeles Dodgers. The best team in the MLB. Worley was sidelined on the DL with elbow tenderness three weeks ago and later discovered that he had bone chips in his right elbow. Worley proceeded not to have surgery to remove the chips until after the season is over. That's a good choice on his part, because we need all the help we can get on the mound with Doc on the DL.

Vance left the team with a 3-2 record and a 3.07 ERA in seven starts this season. In Worley's last start, way back on May 11th against the Padres, he earned the win after allowing three earned runs on six hits through six innings. Worley also walked two and struck out 9 Padres. Worley has thrown a number of bullpen sessions this past week and has reported no pain and that he feels great. Worley will need every bit of "great" tonight as he takes on the 33-21 Dodgers. In one career start (four innings pitched), Worley is 0-0 with a 13.50 ERA against the Dodgers.

Opposing the Phillies for the Dodgers will be the reigning Cy Young Award winner Clayton Kershaw (4-3, 2.42 ERA). The 24 year-old lefty Kershaw is coming off of back-to-back losses, most recently against the Milwaukee Brewers on Wednesday. In that start, he tied a season-high five earned runs allowed on eight hits through 5 2/3 innings. Kershaw walked four and struck out seven to take his third loss of the season. Kershaw will look to bounce back as he takes on the Phils, a team who he has not had a smooth past with. In six career starts, Kershaw is 0-4 with a 5.18 ERA against the Phillies.

With Vance Worley back on the roster, the Phillies have sent C Erik Kratz back to Triple-A Lehigh. Worley is taking the spot of Roy Halladay in the rotation. Halladay, who is on the DL with a lat strain will most likely miss 6-8 weeks. The Phillies are still waiting on Halladay's second opinion from Mets' physician Dr. David Altchek. Hopefully the Vanimal can help the Phillies tread above water in the division. They sit 28-27 in last place in the division and this four game series with the Dodgers will not be easy.

The Dodgers will be without their star outfielder Matt Kemp. Kemp, who came back from the DL with a strained hamstring a bit too early re-injured it last week in his first game back. He'll be with the team in Philly to begin rehab.

Today's lineup vs the Dodgers: