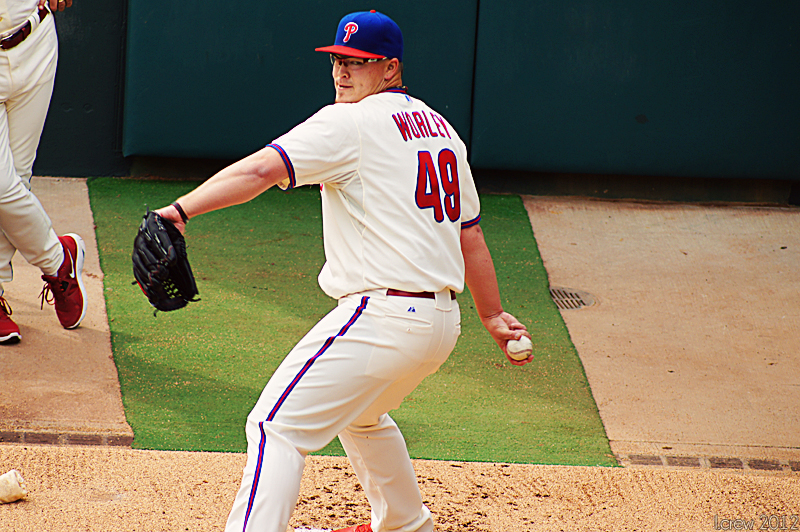 The Phillies have already won this series after taking the first two games against the Rockies. Tonight they'll aim for the sweep of the Rockies. If they do so, it will be their first sweep of a three-game series this season. Last night, Placido Polanco ended the game in dramatic and unusual fashion. The Phillies are now four games under .500 and they are looking to pull closer to that mark. A three-game sweep of the Rockies would certainly give the Phillies some sort of momentum for the rest of this home stand.

Tonight Vance Worley (3-3, 2.80 ERA) will take the hill in an effort to sweep the Rockies. Worley is making his eleventh start of the season, his fourth start since coming back from the DL. Worley was a tough-luck loser in his last outing on Friday against the Blue Jays. Worley allowed only one earned run on five hits through seven innings only to receive zero run support. Worley was handed the loss, his third of the year. Worley will be making his first career start against the Rockies tonight.

On the mound for the Rockies will be lefty Jeff Francis (0-1, 12.46 ERA). Francis will be making his third start of the season tonight. In Francis' debut, on Saturday June 9, he was rocked around by the Dodgers. Francis yielded eight earned runs on 10 hits through 3 1/3 innings. In his last start, on Friday, Francis was hit for four runs on eight hits through 5 1/3 innings against the Tigers. In his career, Francis is 1-1 with a 6.84 ERA against the Phillies.

The Rockies are on a four-game losing streak and have won just one game out of their last 10. Manager Jim Tracy's plan for the rotation has not seemed to have been working. The Rockies' starting roation, who own a Majors-worst ERA of 6.31, have been slimmed down to a four-man rotation and have each been limited to 75 pitches. It hasn't seemed to have worked as Josh Outman gave up four runs in 4 1/3 innings on Tuesday. On Wednesday, Alex White surrendered five runs in 3 2/3 innings. With Francis' recent starts, it could be likely that he will not make it past the fifth inning with his pitch count.