Weekend at Bernie’s? No. Nightmare on Inner Harbor? Probably. 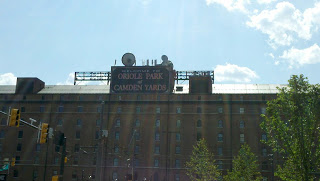 In case you didn't already know this, the Phillies have lost six in a row, all at home.

So of course, facing the 32-25, first place Baltimore Orioles, while throwing Joe Blanton, is the way to fix it.

Honestly, if you're as disgusted as most fans, you may be wrestling with whether or not to even watch, especially when you consider the recent years pains known as inter league play, and that the Orioles usually play the Phillies pretty decent. It can't get worse, right? I mean the Dodgers just completed their first four game sweep of the Phillies in Philadelphia in 66 years! Of course not, Placido Polanco not only has a bad finger, but now he has a wrist injury that required a cortisone shot. Freddy Galvis had a battery of tests on his injured back, and we should find those out after the game. Yippee! I guess things can get worse.

Blanton is being followed by a guy one start removed from the DL (Worley), and a guy with no wins (Lee) this weekend, which should be enough to make anyone worried (though the second and third pitchers still inspire confidence in me). As this team tumbles further down (six back now, eight in the loss column), and people call for more immediate moves (like, calling up Dom Brown), it may be tough to cope. We've had it good the last few years. Every injury was temporary, and overcame easily, and the team just kept winning. If this team, which at times brings me back to the 1990's in my thoughts of the Phillies, is tough for you to bare, I have some advice for watching the game:

Don't worry gang- it's only six games- and we'll have Ryan and Chase back soon. Hopefully Brown hits his way to a call-up, and maybe we make one more move. I'd be thrilled with all of that, though I'm a skeptic at this point. Gotta maintain hope though- after five years of this team pulling it out, they earned a little more rope.