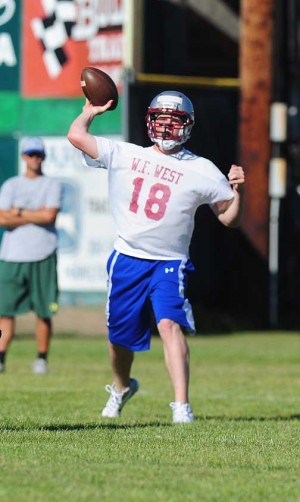 More pitching, though this one appears to have some bat too.  The Phillies have used their second pick, number 54 overall to select RHP Mitch Gueller.  This pick was the one the Phillies received for letting Raul Ibanez go to the Yankees.  He is the gift of Ibanez not accepting the Phillies' arbitration offer. Gueller hails from W.F. West High School in Chehalis, WA.

Once again, River Avenue Blues has a great scouting report:

At 6-foot-3 and 205 lbs., Gueller is the best athlete from the Northwest in the draft class. He’s a legitimate prospect both on the mound and as an outfielder, and the Cougars will allow him to do both if he makes it to school. On the mound, Gueller runs his fastball up to 94 with an advanced changeup and a slurvy breaking ball that is likely to settle in as a slider. As an outfielder, he offers a well-rounded game and all five tools. Gueller has the speed to steal bases and enough raw power from the right side to hit the ball out of the park, plus his arm is obviously strong. He is considered more advanced as a pitcher.

Like many prospects in the draft, there is video on YouTube to watch of them in action. Watch Gueller hit a grand slam:

Check out Gueller's high school athletic profile which includes clips of him playing football as his school's quarterback.