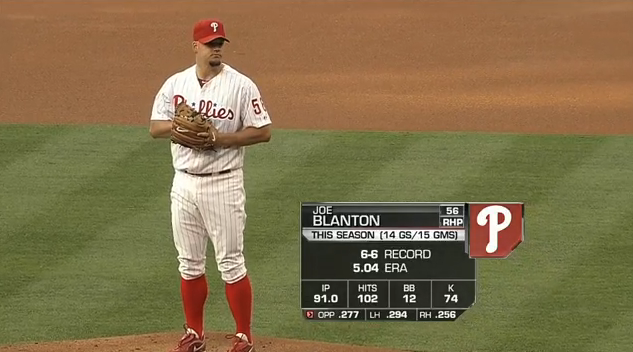 The Phillies have already lost this three-game set in Miami and today they will try to salvage a win to prevent a sweep. At 36-44, the Phillies sit 10 games out of first place and are eight games under the .500 mark. Joe Blanton will play the role of the sweep stopper today against the Marlins. Opposing will be Ricky Nolasco, who is pushing for a sweep.

Blanton (7-6, 4.87 ERA) is coming off of a winning effort against the Pirates on Monday. Blanton tossed seven innings, allowing two earned runs on seven hits while striking out eight. Blanton has allowed 17 home runs in 48 1/3 innings over a span of eight starts. Back on June 3, Blanton was shelled for five earned runs on nine hits, two home runs, while walking one and striking out six against the Marlins in a losing effort. One of those home runs was off of pitcher Carlos Zambrano. In his career, Blanton is 7-3 with a 3.49 ERA against the Marlins.

Phillies first baseman Ryan Howard is making good progress with his rehab stint. The big peice will play in both games of a doubleheader today in Lehigh Valley for the IronPigs.