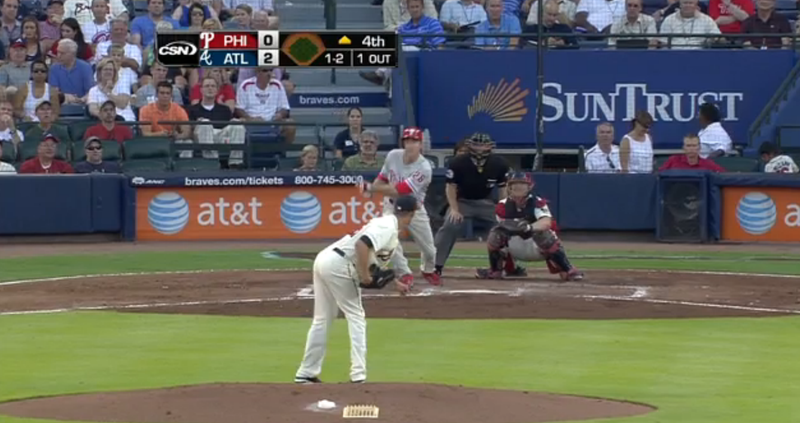 Joe Blanton has always been a second half pitcher, and it really showed tonight in Atlanta. It wasn't an 80-pitch complete game shutout, but it was a great start that unfortunately wasn't backed up by much offense from his team.

In the bottom of the first, Chipper Jones popped up a sacrifice fly to Shane Victorino, which allowed Martin Prado to score. Shane mistakenly thought Ryan Howard was at first covering his position, but he wasn't, so that counted as an error for Shane when he threw the ball to no one. It didn't matter seeing that Prado would have scored regardless of a throw, but it counted as Shane's first error since 2010. 273 Games to be exact.

Michael Bourn scored in the bottom of the third on an RBI infield single from Jason Heyward. 2-0 Braves.

In the next inning, Chase Utley went yard to center field to put the Phillies on the board with a run. 2-1 Braves.

Blanton was cruising along, but the Braves made him work tonight. After 94 pitches and seven innings, Joe was done. He gave up just two runs on four hits, walking one and striking out seven. His earned run average stands at 4.59. Trade value goin' up…

As good as Blanton was, Mike Minor was a tad better. Minor struck out nine guys in eight innings, allowing one run on four hits, and walking none.

Antonio Bastardo walked one and allowed one hit in the eighth, but got out of the jam and didn't allow the Braves to take a bigger lead. Craig Kimbrel came in for the final three outs in the top of the ninth and retired the side striking out two.

Tomorrow they'll wrap up this series at 1:35 with what could be a sweep of the Phils for the Braves. Roy Halladay will take the mound against Tim Hudson.