Joe Blanton Trade to Orioles Does Not Work Out; Stays With Phillies...For Now 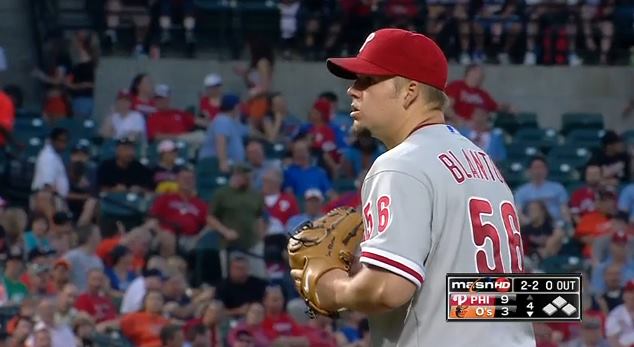 He's still here.  Credit Ruben Amaro for this one.  It sounds like the Orioles expected the Phillies to simply dump Joe Blanton on them for nothing.

There were rumors that the Phillies were looking to shed salary, or a get a prospect such as infielder Jonathan Schoop.  Orioles General Manager Dan Duquette seemed to think the Phillies would cave and eat Blanton's money and take little in return.  If that is the case, then there is no reason for the Phillies to trade Blanton.

The Phillies still have two months' worth of games and an entire month where the team would still be able to make a waiver trade.

The way these waivers work is that the Phillies will place Blanton on waivers.  If a team claims him, the Phillies can either pull him back off of waivers, work out a trade with that team, or simply let the other team claim Blanton.

If Blanton clears, he can be traded the same way the he would have been able to be traded today.  That is a likely scenario, because any team claiming him would be responsible for his contract. So the Phillies are in a win-win situation with Blanton.

If Blanton IS claimed, the Phillies can meet one of their goals by letting the team take Blanton and his salary off of their hands.   If Blanton is NOT claimed, they can still try to trade him and get something back.

I would think Blanton is still likely to go to another team.  But Amaro was not willing to let that happen in a way that did not make sense for the Phillies.  Good for him.