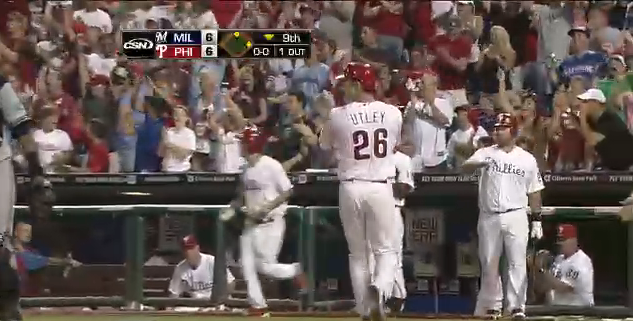 Roy Halladay returned to Citizens Bank Park for the first time since coming off the disabled list during the Dodgers series. He would face Randy Wolf and the Milwaukee Brewers.

It didn't start out on a good note for Doc. In the first inning, Carlos Gomez was able to score on a double from Aramis Ramirez. Corey Hart later brought home Ramirez with an RBI single, giving the Brew Crew an early 2-0 lead.

In the top of the third, Ryan Braun singled to score Carlos Gomez. It wasn't a secret that Roy Halladay wasn't looking very sharp, and his low velocity said so, along with his quickly escalating pitch count.

The fourth inning brought about an even bigger mess for Doc. With two men on, Doc gave up a monster of a three-run home run to Carlos Gomez, which gave the Brewers a 6-2 lead.

After 6 innings and 92 pitches, Roy's night was done. He allowed six earned runs on eight hits, walking one and striking out three. He stands at 1,999 strikeouts for his career.

Michael Schwimer pitched a scoreless inning of relief walking one and striking out two. Don't look now, but Schwim has been pretty solid lately.

In the bottom of the seventh, the Phillies had the bases loaded. The only run would score on a passed ball, which sent Rollins home and brought the Phillies within three runs of tying.

Jake Diekman and Joe Savery pitched two scoreless innings of relief, giving the Phillies offense a chance to come back and tie it up or take a lead.

It got a bit interesting in the bottom half of the ninth. Jimmy Rollins and Juan Pierre were in scoring position with Utley batting and one out. Francisco Rodriguez walked Chase to load the bases for Ryan Howard.

Ryan whacked the ball up the middle for a single which scored two runs, and sent Chase over to third base. Next, Carlos Ruiz tied the ballgame with a single to bring home Chase. Next, Hunter Pence walked to re-load the bases.

Ty Wigginton won the ballgame tonight for the Phils. Wiggy lined one to Ryan Braun out in left field, sending Erik Kratz (pinch runner) home, winning the ballgame. Phillies win their first game of the season after trailing in the eighth, and they've won two in a row.

Cliff Lee and Zack Greinke will square off tomorrow night at 7:10.