Placido Polanco Lands Back on the DL; Kevin Frandsen Call Up 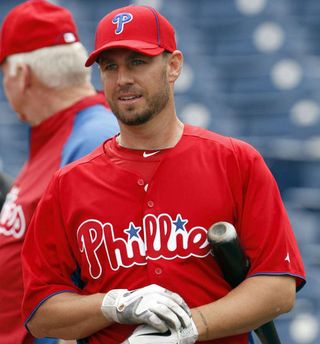 The Phillies placed third baseman Placido Polanco on the 15-day disabled list Thursday because of lower-back inflammation. It is the same injury that sidelined him last July. This marks the fourth time in his three seasons since rejoining the Phillies in 2010 that Polanco has landed on the disabled list. He can never stay healthy, can he?

Polanco's offensive numbers have been on the decline since the beginning of June. He is hitting .255 overall with 15 doubles, two home runs, and 19 RBIs.

It is not Michael Martinez.

Kevin Frandsen, 30, was called up to take the roster spot of third baseman Placido Polanco. In 418 plate appearances with Triple-A Lehigh Valley, Frandsen put together a slash line of .302/.337/.396. He can play shortstop, second and third bases.

According to an IronPigs blog, Ryne Sandberg, who likes to have a little fun when telling his players of major league call-ups, however, he played this one pretty close to the vest when he summoned Frandsen into his office after Wednesday's game.

"It was just a, 'Franny, see me in my office,' type of a thing," Sandberg said. "There wasn't any messing around. The guy's waited long and he's battled, so I just told him, 'Hey, it's your turn.''

Sandberg said Frandsen was "speechless, to some extent" when he got the news.

"His response was, 'wow,' and then he said later on, 'You know what? This is even better than his first call-up,' just because of what he's been through, fighting to get there, making it a little bit tougher," Sandberg said.

Welcome to the Philadelphia Phillies, Frandsen.