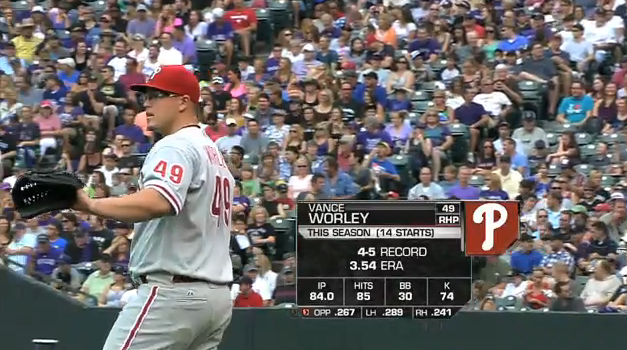 Although they couldn't seal the sweep, the Phillies are coming off of another series win. Their second in a row. On Wednesday, Cliff Lee was fantastic over eight innings. The offense, on the other hand, was not so fantastic. They were only able to push one run across the plate and it cost them in the long run, 12 innings to be exact. Matt Kemp finished off the Phillies with a two-run jack in the 12th inning to prevent the Phillies from sweeping the Dodgers.

As the Phillies come back home for a six-game stint, they'll hope to find a better groove at home for the second half. In the first half, the Phils went 17-27 at home. Vance Worley will head the mound as the Phils open a three-game set against the San Francisco Giants. Two-time NL Cy Young Award winner Tim Lincecum will oppose.

In his last start, Vance Worley (5-5, 3.47 ERA) tossed 6 2/3 innings of two-run ball against the Rockies to earn his fifth win of the season. Worley allowed eight hits and two walks while striking out two. Worley has been consistent this season with his seventh quality start out of eight starts coming on Saturday. The righthander has a 2-0 record with a 2.25 ERA in two career starts against the Giants.

Opposing Worley will be two-time NL Cy Young Award winner Tim Lincecum (3-10, 5.93 ERA), who oddly enough, has not pitched like himself in previous seasons. The righty has had a rough season so far. In 19 starts (104 2/3 innings), Lincecum has allowed 69 earned runs. Lincecum is coming off of his best start of the season thus far. On Saturday against the Astros, Lincecum tossed eight scoreless against the Astros, allowing just five hits while striking out 11. He has been looking for his groove, but then again it's the Astros. In his career, Lincecum is 4-2 with a 3.04 ERA against the Phillies.