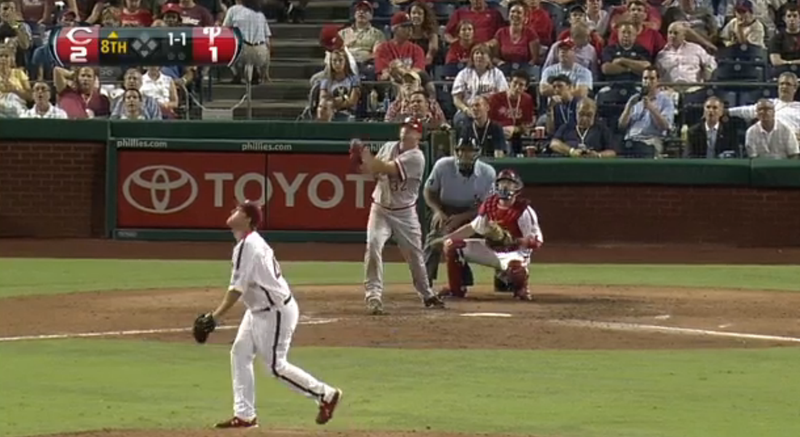 In Vance's previous four starts, he had gone less than six innings and had allowed four or more earned runs. Vance would go six again, but it was a much better start than his last.

While Bronson Arroyo was tossing a no-hitter through five innings, the Reds were backing him up with some offense. In the fifth, Drew Stubbs singled to right to score Ryan Hanigan. Stubbs later scored on a single from Ryan Ludwick. 2-0 Reds.

Domonic Brown made a few fantastic plays tonight. In the top of the second, he sprawled out towards the fence in right field to make a diving catch. Later, he gunned down Jay Bruce with an absolutely perfect throw to home.

In the fifth inning, Brown continued his spectacular night with his first home run of the season, a solo homer to right field, breaking up Arroyo's perfect game. 2-1 Reds.

Josh Lindblom pitched two innings of relief, the only run he gave up came via a Jay Bruce home run in the eighth. 3-1 Reds.

Raul Valdes pitched a scoreless inning of relief before Bronson Arroyo came in to finish what he started.

Arroyo had allowed just two hits tonight, both to Dom Brown. He allowed an infield single in the ninth to Kevin Frandsen, and that would be it for Arroyo after eight innings and 96 pitches.

He allowed another one tonight on a single from Ty Wigginton which scored Frandsen. But, he secured the lead the Reds' lineup gave Bronson Arroyo in his outing, retiring the side. Reds win, 3-2.

Johnny Cueto and Cole Hamels will take the mound tomorrow night at 7:05.