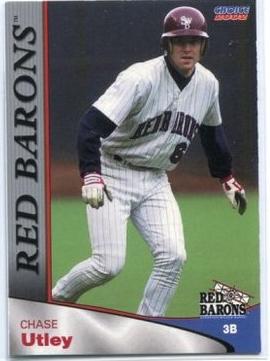 A baseball card from Utley's days at third base.

Well this is sure an interesting development in the Phillies' quest for a third baseman in a time where free agency is barren at the position.

According to Todd Zolecki, Chase Utley approached Ruben Amaro Jr. about the possibility of playing some third base:

Utley approached Amaro about taking some grounders at third. Said it could create flexibility. Said it's early. Might happen. Might not.

Utley has played third base before.   Though he was drafted a second baseman, the Phillies gave him a chance at third.  In 2002 when Scott Rolen was having his differences with management and it was clear the Phillies would need a third baseman, Utley spent an entire season at AAA at third base.

It did not go so great at the hot corner.  However, people assessing talent could not look past his bat.  Scout.com wrote this about Utley back in 2004:

Over the first two months of the 2002 AAA season, Utley’s defense at third was brutal. However, he did continue to show the gap power that is so intriguing. His.263 batting average that season was about…uh… average, but he clubbed 39 doubles and hit 17 home runs. Even more impressively, he cut down on errors significantly over the second half of the season. Phillies fans thought they actually had their third baseman of the future.

Utley made 28 errors at third base that year.    In his own words at the time, he thought he was getting better:

I would give myself an `F' if I was grading my defense early in the season. I think I got better, though, and I made a big turn around from the end of the season to the Arizona Fall League.'

Maybe that confidence still exists with Utley today.  If somehow things worked out, it could make the Phillies' third base problem a non-issue.