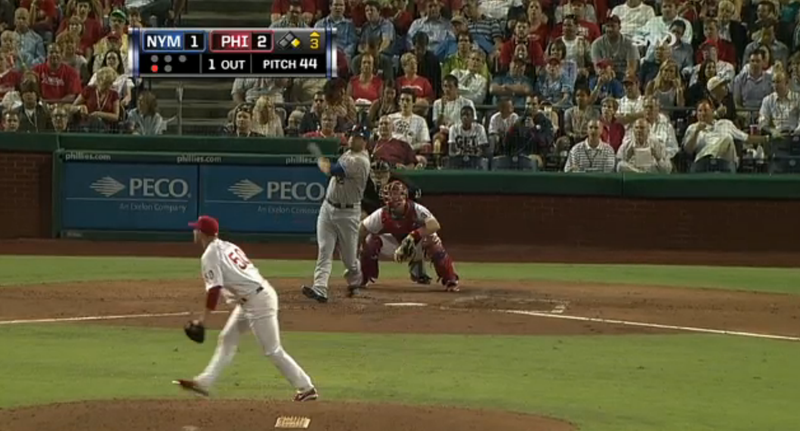 As previously posted, Tyler Cloyd was making his major league debut tonight. In an unexpected spot start for the young righty, the Phillies were sure glad he tossed a solid six innigs to avoid a bullpen game.

Matt Harvey, a rookie starter for the Mets surrendered a run in the top of the first, a sacrifice fly from Ryan Howard which scored Juan Pierre.

Harvey did a bit of hitting himself tonight. In the top of the second, Harvey singled to left to score Scott Hairston, tying up the ballgame.

In Tyler Cloyd's first major league at bat, Cloyd walked. This occurred in the third, along with an RBI double from Jimmy Rollins which scored Kevin Frandsen. 2-1 Phils.

In the third inning with Ike Davis on base, Lucas Duda homered deep to right field, giving his team a 3-2 lead.

After the third, Cloyd settled in. His night would be finished after six impressive innings. He allowed three earned runs on seven hits, walking two and striking out five. Used his cutter and slider a lot tonight. 102 pitches in total, 70 for strikes.

Jeremy Horst tossed a scoreless seventh, a 1-2-3 inning. Antonio Bastardo allowed a hit in the eighth before he was pulled for Phillippe Aumont. Aumont walked one and struck out two in his second outing in the majors.

Josh Lindblom pitched a scoreless ninth for the Phils, as they were looking to come back against New York and prevent the Mets from taking the series.

Unfortunately, the Phils couldn't come back and the Mets took the second of this three-game series.

Tomorrow, Kyle Kendrick and Jon Niese will square off in the final game of this series at 1:05.