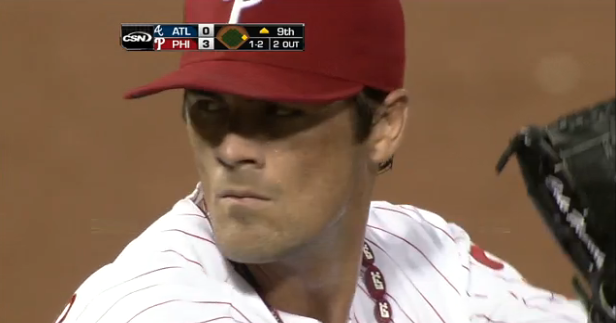 The Phillies were able to prevent a series loss to the Cardinals yesterday as they came back from a 7-4 deficit in the 8th inning with Erik Kratz's three-run home run and came back to win it 8-7 in the 11th inning with a walkoff single from Juan Pierre. Closing out a nine-game homestand with a 5-4 record is a nice accomplishment for the Phils, who have gone 28-29 at home all season. Tonight they will open up a three-game set with the Miami Marlins to kick off a seven-game road trip that they will finish in Milwaukee. Tonight, Cole Hamels (12-6, 3.08 ERA) will take on Nathan Eovaldi (3-7, 4.33 ERA) in the series opener.

Cole Hamels is coming off of a gem of a start. On Tuesday against the Braves, Hamels tossed his first complete game shutout of the season, a five-hitter. It was his first CGSO since Game 3 of the NLDS in 2010 and his first regular season shutout since 2009. Hamels struck out six and walked none to earn his 12th win of the season. Hamels will enter tonight's start in the fifth spot for strikeouts in the NL with 153. In three starts against the Marlins this season, Hamels is 0-3 with a 5.21 ERA. Back on June 30th, the most previous start, Hamels tossed seven innings allowing three earned runs as well as walking three and striking out five. In his career against the Marlins, Hamels is 6-10 with a 3.68 ERA.

Nathan Eovaldi is coming off of a strong start of his own. On Wednesday against the Mets, the righty tossed five scoreless, allowing four hits. Despite allowing no runs to score, Eovaldi did walk a season and career-high six batters. He came out with the win, his third win of the season, his second with the Marlins. Before Eovaldi was traded to the Marlins in the Hanley Ramirez trade, he made a start against the Phillies. Back on July 16, Eovaldi took the loss as he was tagged for three earned runs over five innings. He walked two and struck out three.

Outfielder Nate Schierholtz will not be in tonight's lineup, or any other lineup for the next two weeks as he has been placed on the 15-day DL with a fractured toe. Hector Luna has been recalled for his roster spot.