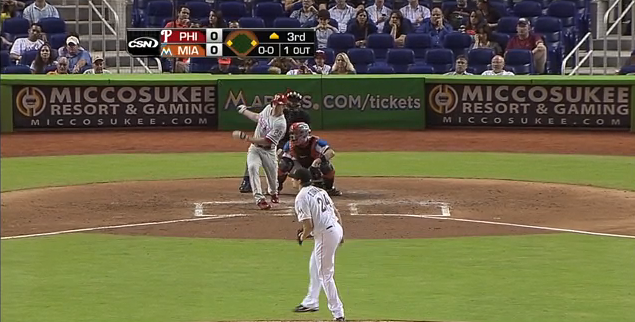 Yesterday, the Marlins were no-hit through six innings by Chris Capuano and the Dodgers. Capuano ended up a tossing a two-hitter, shutting out the Fish.  Cole Hamels started tonight's ballgame looking to do something along those lines, and did just that. Hamels was brilliant tonight in his second consecutive complete game shutout.

The Phillies kicked 22 year old Nathan Eovaldi out of the ballgame after five innings. They scored two in the third inning; an RBI double from Chase Utley which scored Jimmy Rollins, and an infield single from John Mayberry, Jr which allowed Juan Pierre to score. Former Phillie Greg Dobbs had bobbled the grounder, which allowed Mayberry to make it to first safely.

In the fourth, Juan Pierre tripled to the corner in right field which scored Jimmy Rollins from first base. 3-0 Phillies.

With Eovaldi out and Carlos Zambrano in from the bullpen, the offense continued to heat up. Domonic Brown scored in the seventh inning on a sacrifice fly from Erik Kratz.

Meanwhile,  the Marlins weren't hitting much off Cole Hamels. They scrambled together a six-hit night, but were not able to score any runs through eight innings.

In the ninth, Cole Hamels allowed the first extra base hit of the evening, but made it out alive, securing his shutout. Final line: 7 H, 1 BB, 5 K. 22 Straight scoreless innings from Hamels.

Tomorrow night, Kyle Kendrick will take the mound for the Phils against Josh Johnson. Game time is 7:10.