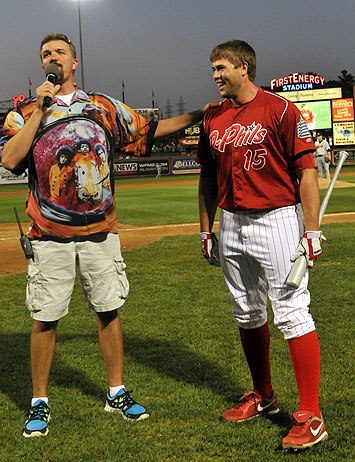 He did it.   Darin Ruf tonight hit is 38th home run to break Ryan Howard's team home run record for AA Reading.  True, Ryan Howard did it in fewer games, but there were plenty of other times in history that players came close, but no one ever reached 38.   And, the Reading Phillies still have one series on the road for him to add to this total.

However, the number you may want to watch is not Ruf's home run total, but his batting average.  Currently, Ruf leads the Eastern League in home runs and in RBI.  The one thing keeping Ruf from a Triple Crown?  His batting average.   Brock Holt of the Altoona Curve, the Pittsburgh Pirates' AA affiliate, is hitting .322.  Ruf?  .321.   This will come down to the wire, but Ruf has been awarded plenty already for his outstanding season.

Even though the season has not ended, Ruf has been named the Eastern League MVP.  And Rookie of the Year (Yeah, they give an award to someone in his first year of AA).

Of note was a roster move by the Phillies today: they outrighted Hector Luna off of the 40-man roster.  The roster now has room for the Phillies to add someone, say, Darin Ruf?  I think we will see him.   How can they not after this amazing season?