John Mayberry Walks it off with RBI Single in Eleventh Inning; Phils win, 4-3 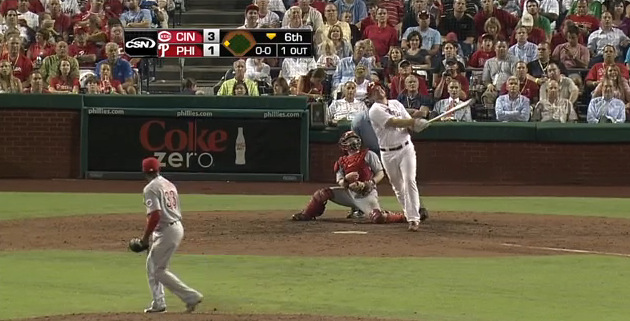 Cole Hamels against Johnny Cueto sounds like an awfully good pitching match-up. The two candidates for the Cy Young award battled in a pitcher's duel after a shaky and rainy first inning from Cole Hamels. Once Hamels found his groove, the Reds were in trouble.

That first inning for Cole looked like a whole lot of trouble. In the middle of a downpour, Cole gave up two singles and walked one. With two outs, Todd Frazier grounded out to shortstop, bringing home Zack Cosart and putting the Reds on the board.

It remained a 1-0 game until the sixth inning when the Reds extended their lead. After two straight singles, Todd Frazier came through again. He smacked a two-run double to center field, which was misplayed by Laynce Nix. 3-0 Cincy.

Phillippe Aumont came into this ballgame in the top of the eighth for his Major League debut. The Phillies stuck with Aumont in the bullpen and sent down Michael Schwimer with the return of Jeremy Horst from the paternity list.

Aumont walked one in the inning, but retired the side without allowing a hit. Solid debut.

In the bottom of the eighth, the Phils had the bases loaded with one out. Jimmy Rollins popped up a sac fly to left fielder Ryan Ludwick, tying up the ballgame.

The bottom of the inning got a little out of hand for the Reds. Juan Pierre walked, Kevin Frandsen reached on an infield single (would have been tagged out, avoided the tag), Ryan Howard did the same on an error from former Phillie Miguel Cairo, and then Domonic Brown grounded into a double play.

Jeremy Horst pitched a perfect top of the tenth, as did Raul Valdes in the top of the eleventh.

The bases were loaded with nobody out in the bottom of the inning for Domonic Brown. Dom made it safely to first, but Kevin Frandsen was tagged out at home. John Mayberry wrapped it all up with an RBI single into left field, winning the ballgame, 4-3.

Tomorrow night, the Phils and Nats will start a three-game set. The Phillies will send out Kyle Kendrick, and Edwin Jackson will start for the Nationals.