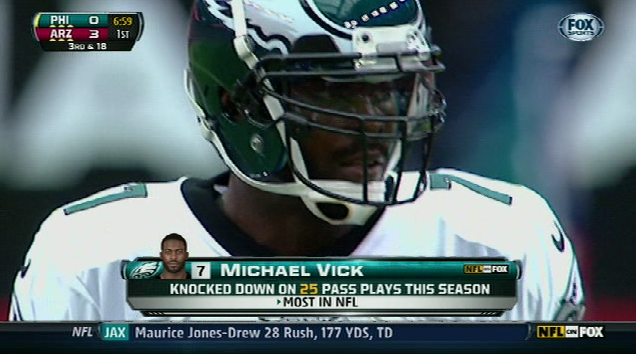 After last week's dismantiling at the hands of the Arizona Cardinals, the Philadelphia Eagles find themselves searching for answers. The Offensive Line was dismal, Michael Vick turned the ball over twice, and Coach Andy Reid refused to run the ball. For the Eagles to even have a prayer against the Super Bowl defending champion New York Giants, their issues must be worked out fast.

Philadelphia will certainly have the chance to right their pass game, as the New York Giants Defense ranks has allowed an average of 261.7 yards a game through the air, good for 22nd in the league. With Jeremy Maclin back from a hip pointer injury, Michael Vick will certainly look to find one of his favorite targets early and often.

Although establishing a solid passing game is crucial, the Eagles must balance out their Offense. LeSean McCoy saw just four carries in the first half last week, and just thirteen for the game. Despite the limitation of his carries, McCoy ranks 10th in the league in rushing yards with 261, and averages 4.5 yards a carry. And with Shady's never ending feud with Giants DE Osi Umenyiora, he'll look forward to shutting up his opponent quickly.

On Defense, Philadelphia has been stellar under the leadership of MLB DeMeco Ryans. The Linebacker has 18 solo tackles (19 total), 1 Forced Fumble, 1 INT, and 1 sack in just three games played. On a night in which the Eagles honor their former captain Brian Dawkins, the team will look to their new leader in Ryans to supply the intensity. Even with the loss of Hakeem Nicks, who is out with a knee injury, shutting down Eli Manning and the Giants will be no joke. Tight End Martellus Bennett is thriving with his new teams, and ranks fifth in the NFL among Tight Ends with 15 catches for 185 yards and 3 TDs. The Eagles defense must also be wary of WR Victor Cruz, who salsaed his way into the spotlight last season after putting up 110 yards and 2 Touchdowns in a Week 3 matchup against Philadelphia last season. Being given the challenge of shutting him down will be Nnamdi Asomugha, who failed to stop the second year Wide Receiver last season.

New York Giants Running Back Andre Brown may have supplanted Cruz as the team's new X-Factor. The third year back has 184 yards on 33 carries, and has certainly made the most of his time, as Ahmad Bradshaw has been out with a neck injury. Although Bradshaw will be returning tonight, Brown will certainly still see a lot of carries.

Predictions By The Eagledelphia Staff:

It might be a total cliche on my part, but I think 20 really is the magic number for the Eagles, and not just because the team is retiring Brian Dawkins' number before the Sunday Night fight with the Giants. With last week still fresh in their mind, I expect a different team taking the field. Factor in home-field advantage and this makes for a great game. It will be close at the end, but I see a fairly late score by the Eagles making the difference and leading them to their third win of the season.

I've gone back and forth with this pick, and although emotions will be running high on the side of Gang Green with Dawkins return, I just cannot see the Eagles pulling this one out. We've seen both sides of Michael Vick, but I fear we should expect to see more of Arizona game Vick, rather than Baltimore game Vick. He still certainly gives you a better chance to win than his counterpart Nick Foles, but this is what you get with Michael Vick as your starting Quarterback. He does more than he's supposed to, he does not always make the smartest decisions, and he turns the ball over frequently. Despite having one of the best Running Backs in LeSean McCoy they refuse to use him effectively, and that will be the downfall of this team.

It is the blog that I have been checking systematically