Fifteen-Hit Night Leads to 9-7 Win Over Marlins, Phillies Back at .500 Baseball 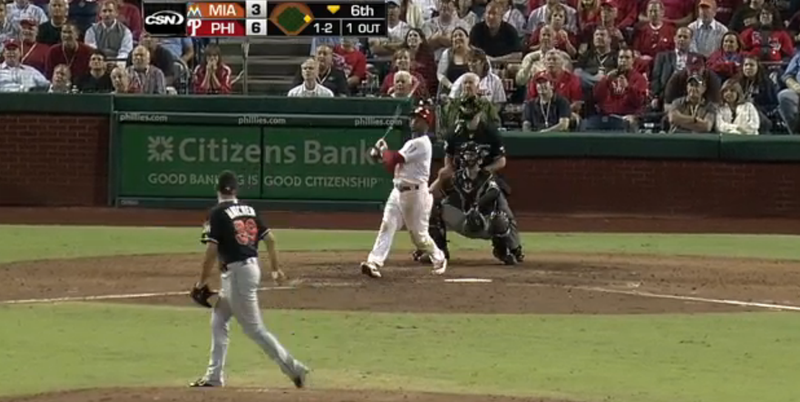 The Phillies are playing some exciting baseball right now, no doubt about that. Winning the wild card isn't too out of the question, but the Phillies are making it look more and more likely with the way they've been hitting the ball.

The Phils scored first tonight in the first inning. With the bases loaded, Ryan Howard hit into a double play which scored Jimmy Rollins and sent Juan Pierre to third. To follow, Carlos Ruiz sliced a double to deep right to score Pierre. The six-hole hitter, Domonic Brown, sent Chooch home with an RBI single of his own. Just like that, the Phils got ahead of Nathan Eovaldi and the Fish, 3-0.

Roy Halladay reached trouble in the third inning tonight. Doc loaded up the bases for Justin Ruggiano. Ruggiano made it safely to first on an infield single, scoring Donovan Solano. Jose Reyes sent home the next run with a sacrifice fly which scored Rob Brantly. 3-2 ballgame.

In the home half of the third, Chase Utley pushed the Phillies' lead to 4-2 with an RBI single to right-center.

Juan Pierre continued the hot-hitting in the fifth with a single which brought home Jimmy Rollins. 5-2 Phils.

In the top of the sixth, Giancarlo Stanton sent his 34th home run to the seats in left field for a solo shot. 5-3. Roy Halladay helped his own cause in the bottom of the inning with an RBI single which sent home Michael Martinez. To follow, Jimmy Rollins clobbered his 18th homer of the year, deep to right field. 8-3 Phillies.

The seventh inning was ugly. To start it off, Rob Brantly scored on a double from Bryan Petersen. Out goes Roy Halladay, in comes Josh Lindblom. Ruggiano singled to right to score Petersen, followed by a fielder's choice and a strikeout. Carlos Lee contributed with an RBI single to score Ruggiano. In comes Jeremy Horst. Greg Dobbs singled to center to score Jose Reyes, making it an 8-7 ballgame. B.J. Rosenberg came in for the final out, getting Donovan Solano to ground out.

In the bottom of the inning, Jimmy Rollins tacked on an insurance run with a sac fly to right field, bringing home John Mayberry.

Phillippe Aumont looked to be in a pickle in the eighth with two men on. But, he would strike out Justin Ruggiano and Jose Reyes to end the inning. Good stuff.

With a 9-7 lead, Jonathan Papelbon came in to send the Phillies to their sixth straight win. Two quick outs led to a swinging strikeout of Greg Dobbs.

Tomorrow at 4:05, Cliff Lee and Josh Johnson will square off in the final game of this series.