Keith Law: Triple Crown Does Not Make a Hitter an MVP as Tigers’ Miguel Cabrera Closes in on Feat 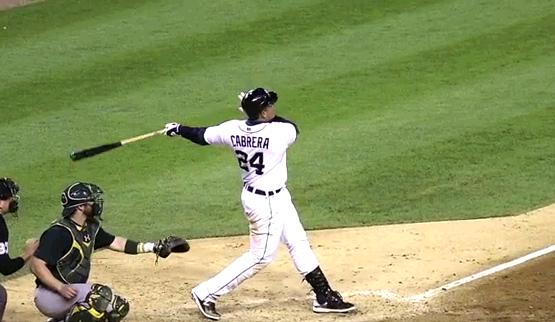 Miguel Cabrera is having one of the finest offensive seasons in recent Major League history, and is chasing an offensive  Triple Crown, which means leading the league in batting average, home runs, and RBI, a feat not accomplished since Carl Yastremski in 1967 and only 15 times in Major League Baseball history.  Would it be fair to say that someone who accomplishes this rare feat would be the league MVP? 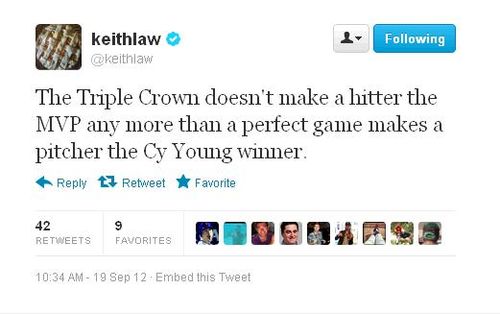 I can understand an argument being made for why a particular player could deserve an MVP despite there being a Triple Crown winner, but Law makes a really odd comparison in choosing to compare to a perfect game and a Cy Young Award winner.

A perfect game is a one-time accomplishment.  Phil Humber did it for the White Sox back in April.  But I do not think that anyone out there advocates Humber should win a Cy Young award this year, with a 5-5 record and an incredibly inflated 6.64 ERA.  Humber lost his spot in the White Sox pitching rotation.

The other prominent name for the MVP award is Mike Trout.  Trout is hitting .327 with 27 home runs and 77 RBI.   Compare this to Cabrera's .330, 41 home runs, and 130 RBI.  One reason for Trout's lower totals is that Trout was not called up to the Major Leagues until May.  The Angels sure could have used him during that pitiful April, so it's clear that Trout is the most valuable player to his club… for those five months.

So Cabrera leads Trout in every offensive category.  Where Trout has a lead over Cabrera is in WAR, the "Wins Above Replacement" statistic.   Fangraphs gives Trout a 9.4 WAR to Miguel Cabrera's 7.4 WAR.   WAR gives an indication on how that player would fare in his position against a "replacement" player at that position, from the minor leagues or from the bench.

I have a a couple problems with picking an MVP based on WAR.  With WAR, there is no one accepted standard.  Fangraphs acknowledges that they hold a different standard than other sources.   Whose WAR is the proper standard?  I cannot see voters using it as a litmus test for this reason.

Secondly, WAR is a comparison to other players at that position.  Jimmy Rollins is the leading shortstop in baseball with a 4.9 WAR or 22nd overall in the league, but I do not think fans would hold him that high when compared to other positions.  So Cabrera is only judged in relation to other third basemen and Trout only to other center fielders.  That makes it difficult.

I think Law was objecting mainly to the idea that the Triple Crown be an automatic litmus test for a player to be MVP.  Similarly, I do not feel that WAR should be a litmus test either.  The ultimate question is, who was most valuable, not by some numeric standard (though numbers help) but who was most responsible for making their team succesful.  In the minds of voters, playoff births often determine an MVP.

If the season ended today, the Angels would miss the playoffs, as would the Tigers.   But the Tigers stand two games out of first place in the AL Central.   Cabrera putting the Tigers on his back and leading them into a playoff birth would, I think, make him the lock at MVP.  There is a better chance of that happening than if Trout did it with the Angels.  It is not always a numbers game, but about which valuable commodity helped a playoff berth, as we saw with Jimmy Rollins in 2007.

Trout is having an unbelievable season and I think that if he played the whole season we would be able to compare him to Cabrera much easier.  If the Angels were playoff-bound too, that would make the decision more difficult.  But, Trout has not played all season and the Angels will likely miss the playoffs. As a result, my pick is Cabrera.  While I can envision a situation where a Triple Crown winner is not the MVP, this is not it.  I believe the voters will go Miguel Cabrera.