Now That It's Over- Thinking About the 2013 Phillies 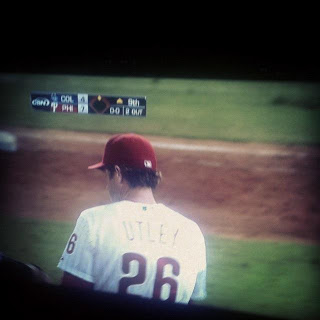 The Phillies won't play another home game in 2012. That's merciful, given they are .500 right now. With the season now over essentially, it's time to look at next season, and wonder where they'll be in a calendar year. While it's painful to watch the playoff run end, it's important to remember the Phillies were neither as bad in 2012, or as good as they looked in early September, during this season as you may have thought.

If the 2013 Phillies are going to get back to contending, they will not be standing pat this off-season. They simply aren't good enough to do that. After last year's relatively quiet off-season produced this 78-78 ball-club, they should know better. Without a pipeline of young prospects, at least not yet, free agency has to fill the club's holes. Just what will they look like in 2013? Well, here's my thoughts:


Looking at their free agency needs, the Phillies need one, possibly two, outfield starters, a set-up man, and an infielder, most likely. These can't be cheap, at the margins moves either. This team is not that close to the Nationals and Braves right now, as this last homestand proved. It's time for some change.