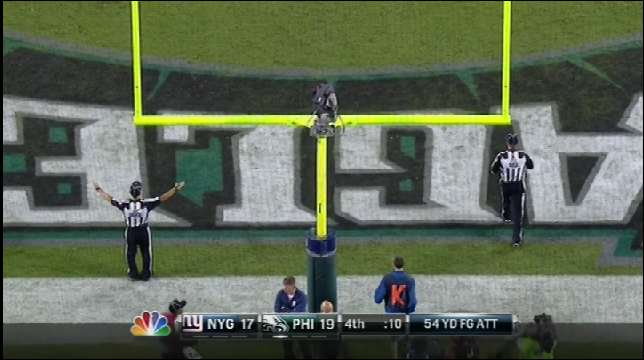 The Eagles officially cemented now-retired safety Brian Dawkins by retiring his number 20 in a ceremony at halftime during tonight's game.  Dawkins pumped up the crowd prior to the game as Philadelphia fans had gotten accustomed to during his tenure in Philadelphia.  The birds would keep up the energy throughout the night in taking down the New York Football Giants.

The first quarter was mostly uneventful.  Initially it seemed the Giants and the Eagles were going to trade punts back and forth for the whole game.  But with 1:53 left in the second quarter Michael Vick finally connected with DeSean Jackson for a 19-yard touchdown reception.  The extra point by Alex Henery made it 7-0 Eagles.

With eight seconds left in the first half, Lawrence Tynes connected on a 25-yard field goal to make the game 7-3 Eagles.

In the third quarter the Eagles struck first with a field goal.  But the Giants went right back to work and moved quickly down the field.  A 14-yard touchdown pass to Victor Cruz and the extra point by Tynes made it a tie game at 10.

The key defensive play of the game for the Eagles occurred in the third quarter.   With the Giants threatening in the red zone, Dominique Rogers-Cromartie intercepted an Eli Manning pass in the end zone.  Henery connected on another field goal to make it 13-10 Eagles.

In the fourth quarter, the Eagles almost disappointingly settled for yet another field goal, this time Henery connected for 35 yards to bring make it 16-10 Eagles.    But the Giants responded almost immediately.

With the Eagles threatening at the two minute mark in the fourth quarter, the Giants were able to stop the Eagles in the red zone.  Failing to capitalize in the zone fully with a touchdown, the Eagles had to settle for their fourth field goal of the night and the Eagles took a 19-17 lead with 1:49 left to play.   This would mean that a field goal would win it for the Giants with plenty of time for the Giants to get within field goal range.

With 15 seconds left in the game, the Giants brought out the thus-far effective Lawrence Tynes for a 54-yard attempt with 15 seconds left.  The first attempt by Tynes was wide, but Eagles head coach Andy Reid had called a time out right before the snap, which nullified the attempt.  After the time out Tynes got one more chance at the uprights.   He was short.

The Eagles now sit at 3-1.  Their three victories came with a combined margin of just four points.  The Giants are now 2-2 and have two losses to division opponents, which could prove critical down the stretch as teams make playoff pushes and may need a tiebreaker.

The Eagles' next opponent is the Pittsburgh Steelers next Sunday in Pittsburgh.  Kickoff is scheduled for 1:00 p.m.