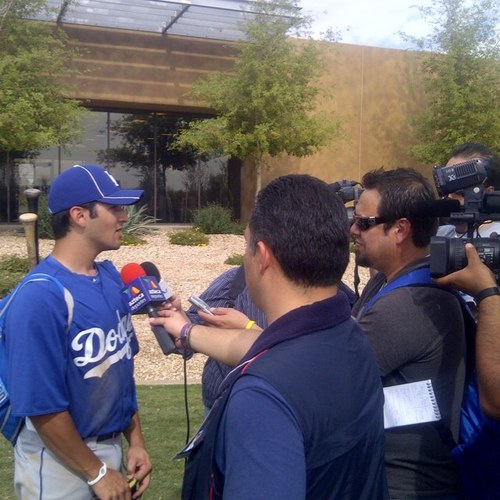 Jarrin was a rookie-ball infielder who hit .209 with three home runs and nine RBI in 26 games.  Jarrin is the son of broadcaster Jorge Jarrin and grandson of Jaime Jarrin, a Hall of Fame Los Angeles Dodgers Spanish broadcaster.     Jarrin was drafted by the Dodgers in the 40th round of the 2011 draft out of East LA College.

Jarrin was excited by the news and shared it on his Twitter page:

Jarrin describes himself as a Los Angeles Kings fan and a hockey fan.   On Twitter he made the joke, "Feeling a lot like Brayden Schenn today!", referring to the Flyers center drafted by the Los Angeles Kings and later traded to Philadelphia.

The trade has already proven successful for the Phillies.  At AA Reading, Ethan Martin went 5-0 with a 3.18 ERA, and reliever Josh Lindblom is 0-1 with a 3.68 ERA and has recorded one save.  Martin helped the R-Phils down the stretch to a playoff birth and Lindblom was a more-stable presence compared to the parade of minor league arms the team had been used to.

Victorino, however, has been a disappointment for the Dodgers.  As the Dodgers' leadoff hitter since being acquired, Victorino has hit .227 with a .304 on base percentage.