Phils Drop Another to Houston Astros, 5-0 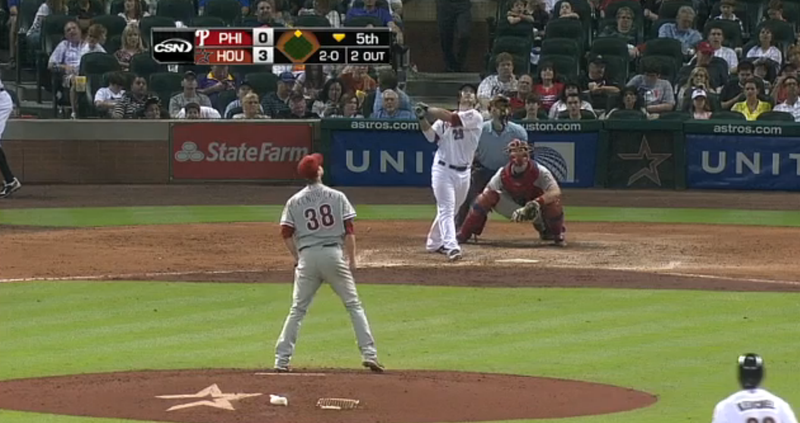 Have we found Kyle Kendrick's kryptonite in the Houston Astros? It seems like it. Kyle and Dallas Keuchel squared off tonight in the third game of this four-game series. Kendrick has been wonderful for most of the 2012 season. Tonight was just a bump in the road, like it normally is against the Astros.

In the bottom of the first, Justin Maxwell homered to left to score Jose Altuve. The Astros took a 2-0 lead.

Jason Castro was able to score on a fielder's choice in the second, due to Kyle Kendrick failing to cover first base on a double play. 3-0 'Stros.

Keuchel, the pitcher, scored on a ground rule double in the fifth hit by Brett Wallace. 4-0 ballgame.

After five innings, Kyle Kendrick was taken out for Josh Lindblom. Kendrick allowed four earned runs on seven hits, walking none and striking out four. He tossed 91 pitches total, just 58 for strikes.

Dallas Keuchel's strike-ball ratio was worse. In 5 & 1/3, Keuchel held the Phillies to just five hits while walking four. A run did not score. He tossed 95 pitches, 48 for strikes.

In the bottom of the sixth, J.D. Martinez singled to center, scoring Castro. Houston extended their lead to 5-0.

Kevin Frandsen doubled with two outs in the ninth, but the Phillies couldn't come back tonight, getting shut out to the Astros, 5-0.

The Phils will look to even up the series 2-2 tomorrow in the finale of this series. Roy Halladay will take the mound against Jordan Lyles at 2:05.