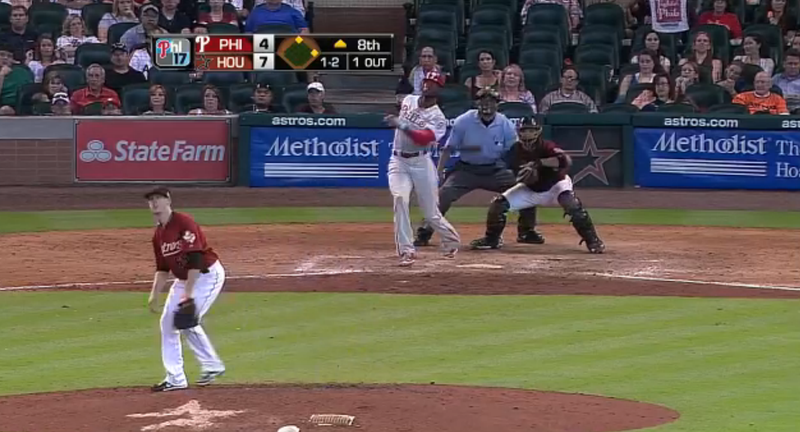 This was a must-win for the Phillies, no doubt about that. Being three games back in the second wild card spot with 16 left to play, the Phils had to beat the last-place, worst in MLB Astros.

Luckily, the Phils backed up Roy Halladay with some early offense. In the top of the first inning, Jimmy Rollins scored on a sacrifice fly from Chase Utley.

In the third, Scott Moore homered to left field for a two-run shot, putting his team up 2-1.

The Phillies' offense really kicked into high-gear in the fifth. Juan Pierre came through with an RBI double to score Rollins. The Astros intentionally walked Chase Utley (again) to face Ryan Howard. Howard proceeded to bring home Pierre and Utley with a two-run double. Howard kept running to third, but was out on a sliding attempt. 4-2 Phillies.

In the bottom of the sixth inning, Carlos Corporan homered over Domonic Brown's head in right field to make it a 4-3 ballgame.

Antonio Bastardo came in for the seventh. After walking one, Phillippe Aumont would come in to replace him, and it didn't go as planned.

After walking Brandon Laird, Justin Maxwell came through with a two-run bloop double into shallow right field. It didn't stop there. With Aumont still in, Matt Dominguez singled, scoring Laird and Maxwell. 7-4 Houston. Justin De Fratus came in and finally retired the side after a horrendous seventh inning.

Dom Brown nearly tied the ballgame in the top of the eighth. With Carlos Ruiz and John Mayberry on base, Brown ripped a two-run double to deep center. Without the hill out there in center field, that would have been a three-run homer. 7-6 Astros.

Justin De Fratus pitched the eighth, and retired the Astros in order. A much needed quality inning from the bullpen.

The Phils had something cooking in the ninth after Rollins singled then stole second. However, Carlos Ruiz would ground out to end the ballgame. Astros take three of four, and win this one, 7-6.

The Phillies will head to New York to take on the Mets tomorrow at 7:10. Cliff Lee will start against knuckleballer R.A. Dickey.