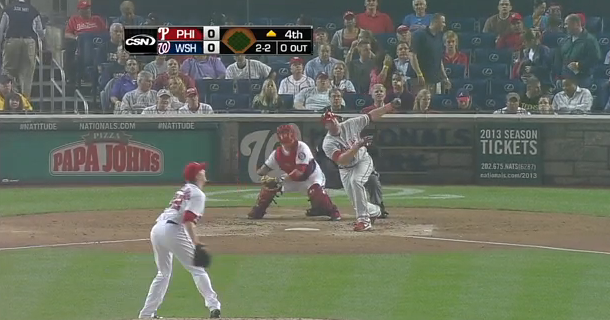 Anyone still watching out there? The Nationals have clinched the National League East. All that's left to do now is finish these next two games. For the Phillies, all they're trying to do is end the season with a few more wins.

Tyler Cloyd was originally scheduled to start tonight's ballgame in Washington, but due to a tired arm, this became a bullpen game. B.J. Rosenberg started it off for the Phillies, followed by the rest of the troops.

After three scoreless innings between the Phils and Nats, Darin Ruf broke the tie with a solo home run in the fourth, a moon shot to deep left field.

The Nats got that run back, though. In their half of the inning, Adam LaRoche scored on a single from Roger Bernadina. All even at one.

After four solid innings from Rosenberg, Charlie pulled him for Jake Diekman. Rosenberg allowed just the one run on three hits, walking two and striking out three.

Diekman pitched a scoreless fifth. He gave up two hits, but struck out two. Josh Lindblom would come in after that.

In the bottom of the sixth, Adam LaRoche hit a solo home run for his 33rd of the season and 100th RBI. After a quick curtain call from the fans, the Nats were up, 2-1. Josh Lindblom wouldn't get out of it that quickly, though. Lindblom gave up three hits total in the sixth, one of which led to a run; Steve Lombardozzi singled to center which scored Mark Derosa. 3-1 Nats.

Darin Ruf hit his 42nd home run of the season (39 were in AA-Reading) in the eighth inning, another solo shot to left field. 3-2 Nats.

Antonio Bastardo, who has been excellent as of late, allowed an insurance run to score in the eighth. Steve Lombardozzi hit a sac fly to center which scored Roger Bernadina. 4-2 Nats.

The Phillies could not come back as they dropped game two of this final series. Tomorrow marks the final game of the 2012 season. Cliff Lee will take the mound for the Phillies against Edwin Jackson. First pitch will be at 1:05.