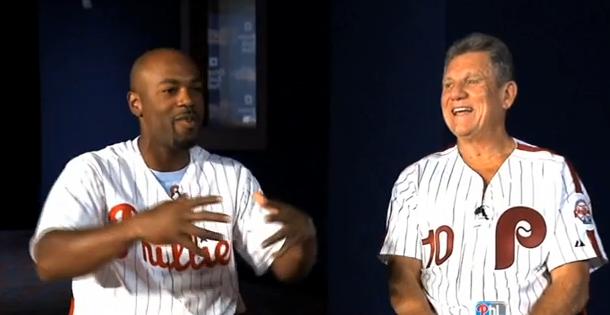 The Marlins owner hates everybody whoever manages for him.   Former Phillies manager and shortstop Larry Bowa has a temper and is not afraid to speak directly and frankly.    Seems like the two would be a disaster, right?   That obvious disaster waiting to happen did not stop the Miami Marlins from interviewing Bowa for their managerial opening, FoxSports.com reports.

Bowa reportedly met with the Houston Astros earlier this offseason to discuss their managerial opening.    Bowa has not been in uniform since coaching with the Los Angeles Dodgers in 2010.  After Dodgers manager Joe Torre left managing, Bowa was not chosen to be part of new manager Don Mattingly's coaching staff.

Part of me wishes no part of the Miami Marlins on Larry Bowa, one of my favorites since I met him at Phillies baseball camp in 1988 when he was the Phillies' third base coach.  The other part of me wants to see Bowa to get a multi-year managerial deal with the Marlins.  That way, he would manage maybe a year, get fired, and get paid to do nothing for a few years while he appeared on MLB Network for extra pay.

Plus – it would be fun to watch, right?  I can see good ol' Larry going off on Loria.  The moment that the owner Loria, an art dealer by trade, screams about baseball decisions, Bowa would not stand for it.  But as I've said before, the Marlins are Loria's toy and he's going to play with it the way he wants.

That said, I think former Marlins catcher Mike Redmond will get the job.  I can see the Marlins trying to copy the Mike Matheny hiring with the Cardinals and thinking that the former backstop would be a good choice.  Plus, with only limited minor-league experience, Redmond will be cheap.  Bowa should command the salary of someone who managed for two major leagues and coached for four.