Kiss it Goodbye: Phillies End 2012 Season with 5-1 Loss in Washington 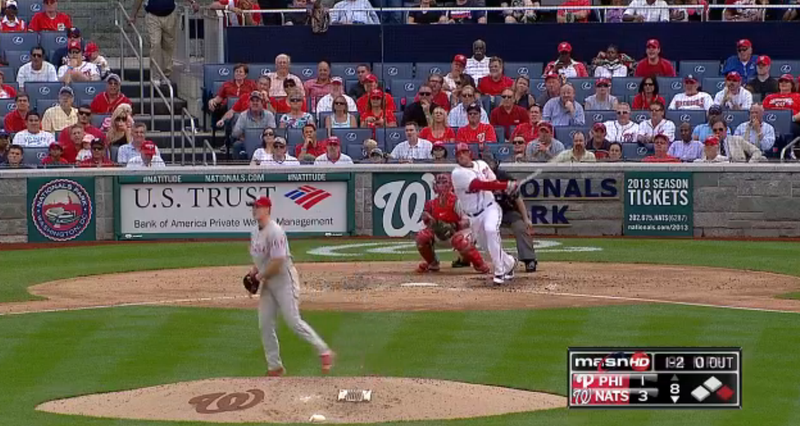 That's a wrap. The Phillies ended the 2012 season this afternoon against the National League East Champion Nationals. Cliff Lee and Edwin Jackson squared off, both looking to end the regular season on a good note.

In the bottom of the inning, Cliff Lee had a rough time shaking of the Nats. Ryan Zimmerman started the inning off with a solo homer drilled to the corner in right field. Later with Michael Morse on base, Tyler Moore doubled to score Morse. Cliff Lee struck out the next two batter to end the inning, but, Washington jumped ahead to a 2-1 lead.

After six innings from Cliff Lee, his afternoon and season wrapped up. Cliff allowed three earned runs on eight hits, walking none and striking out seven. He ends the season with a 3.16 ERA in 211 innings. He struck out 207 batters and walked 28, which results in a 7.39 K/BB ratio. That's the best in the majors in 2012.

For the bottom of the seventh, Justin De Fratus came in and pitched a scoreless inning without any walks or hits. The bullpen has been consistently solid all season, minus a few hiccups in Chad Qualls and the occasional Josh Lindblom outing.

The Phillies couldn't pick up any hits in the eighth, leaving it to Jonathan Papelbon for the bottom of the inning. After Ryan Zimmerman walked, Michael Morse clobbered a two-run homer to right-center field. 5-1 Nats. Charlie Manuel pulled Papelbon with one out to bring in the Australian relief pitcher Tyson Brummett.

In his major league debut, Brummett allowed back to back singles to Ian Desmond and Danny Espinosa. However, Brummett got Jesus Flores and Chad Tracy to strike out swinging.

In the top of the ninth, Domonic Brown popped up to foul territory, Darin Ruf struck out swinging, and Ty Wigginton kept the inning alive with a walk. The next pitch the Phillies would see would be sent to right field for a pop-out from Michael Martinez. Nats win, 5-1.

I would like to personally thank the Phillies for an entertaining season, to say the least. The ending wasn't what we all wanted to see, and sadly the postseason streak had to come to an end. But, they're still our Philadelphia Phillies. They still fight, and they still represent the name on the front of their jerseys, not the back. Also, I'd like to thank all of the readers of Philliedelphia who have supported us on our Facebook page and Twitter page. Thanks for hanging in there with us. See you all during spring training! -Danielle, Philliedelphia's recapper.