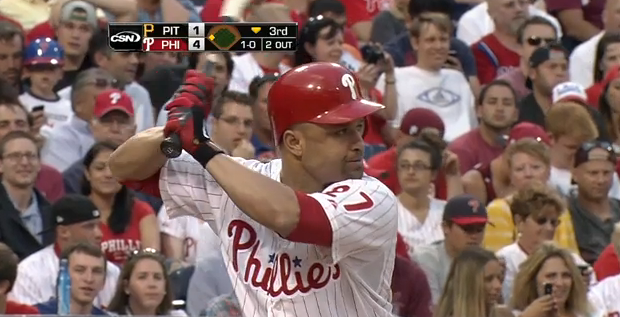 According to the Philadelphia Inquirer's Bob Brookover, the Phillies have declined Placido Polanco's $5.5 million contract option for 2013.   They will instead pay a $1 million buyout to Polanco.  The oft-injured Polanco is no longer a sure bet.  It remains to be seen how healthy Polanco is or if he will seek playing again.

Polanco was perhaps most productive for the Phillies in 2010, when he batted .298.  In 2011 he followed it up with being named a National League All-Star and winning a gold glove.  But, injuries started getting in the way and Polanco ended up playing just 122 games.  In 2012, Polanco played in just 90 games and hit just .257, the lowest he has in a full season at the major league level.

So ends the second Phillies tenure of one of my favorite Phillies players.  If only had General Manager Ed Wade not traded Polanco for Ugueth Urbina back in 2005.  Urbina would have otherwise been released, and reports stated that the Tigers would have taken David Bell, but Wade felt obligated to keep Bell playing third base and Polanco was shipped out.

For the Phillies Polanco has started games at third base, second base, shortstop, and left field, and for much of his Phillies tenure was the number-two hitter managers Larry Bowa and Charlie Manuel loved to have.

When the weather cool downs and you need something to throw on, stay in style with a jacket from Buckle