Reports Continue to Surface that Michael Vick Could Be Out as Eagles Quarterback; Nick Foles to Start 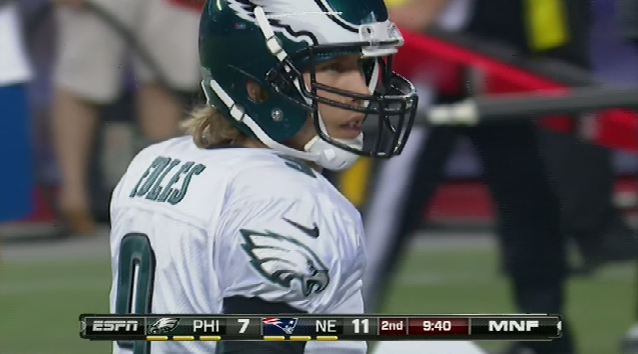 Will Foles get his shot?

Those two bad mistakes could not help the defense.  But, perhaps Michael Vick had an idea there may have been a change.  Vick himself alluded to possibly being benched in his postgame comments, via the Washington Post:

“Obviously, he’s thinking about making a change at the quarterback position,” Vick said. “The thing I do know is that I’m giving us every opportunity to win. I’m trying my hardest. Some things don’t go right when I want them to. Some things do. So if that’s the decision that (Reid) wants to make, then I support it."

Also of note: the Philadelphia Eagles announced that their offices would be closed today and Reid could not meet with the media.   Eskin passed on to 94 WIP that Eagles staff was indeed at the NovaCare center today and meeting.

NFL.com's Ian Rapoport on Twitter first reported something similiar to Eskin's report and then followed it up with the sentiment that the final decision has not been made:

Another Eagles source: Don't be surprised if change at QB comes. Vick knew what was at stake Sunday, knew how pissed Reid was.

Told Reid isn't ready to commit to a QB change because it won't solve all problems. 1source won't be surprised if it happens tho.

So, it's something to think about while being hurricaned in.  I am not sure that I can pin the Eagles' problems on Vick.  Vick has been battered this season and if watching at home I'm never comfortable he has a chance to throw the football, I am sure he cannot be either.