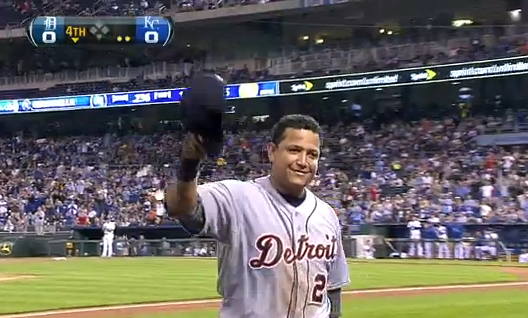 Let's take a look at what has happened to the Phillies in the playoffs since winning the World Series back in 2008.

What do all of these teams have in common?   They all went on to win the World Series for one.  They are also among the remaining teams in the MLB Playoffs in 2012.   Aside from the Cardinals, Giants, and Yankees there's just one left:  The Detroit Tigers.

There is a lot to like about the Tigers.

Let's start with former Phillies foe from the Florida Marlins: Miguel Cabrera.   Cabrera battled his way back from addiction  and put forth what likely will be an MVP performance on the way to winning baseball's first Triple Crown since 1967.   Cabrera also returned to third base, a position he has not played since a short time after the Marlins trade to the Tigers.

Second: Perennial Cy Young contender Justin Verlander.  In 2012 he was 17-8 with a 2.64 ERA and surely will get some Cy Young votes.  On his resume he has a Rookie of the Year award, a Cy Young, a rare pitcher MVP award, and two no-hitters.   He just fascinating to watch.   Like CC Sabathia for the Yankees, Verlander pitched a Game 5 in the ALDS and won't open the series, but look for Verlander to be dominant.  He should get two starts if the ALCS goes seven games.

Third: Former Phillies.  Okay, there really aren't any who played for the Phillies.  But Gene Lamont did manage AAA Scranton-Wilkes Barre in 2005 and Quinton Berry was a former Phillies farmhand that they let get away.   I really liked what I saw of Berry at Reading a couple years ago and I was disappointed the Phillies let him go.   He is a speedy center fielder who stole 51 bases at Class A Clearwater in 2008 and 48 at AA Reading in 2009.   Berry stole 21 for the Tigers while hitting .258 in 291 at bats.    He has three hits in 10 at bats so far this postseason.

With Verlander, Cabrera, and the threat added by other regulars in the lineup such as Prince Fielder,  the Tigers have the potential to be dangerous.  They are indeed a fun team to watch.   As a Phillies fan, let's see someone else win other than the last three to knock the Phillies out and the last three to win World Championships.