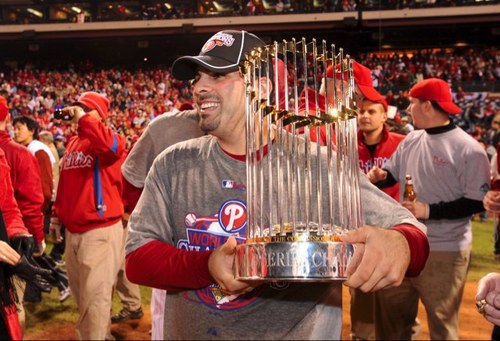 A former Phillie (well not really a Phillie, just a batting practice pitcher) is suing the organization he once worked for as well as suing GM Ruben Amaro Jr.

Ali Modami, who worked for the Phillies as the team's batting practice pitcher from 2007 through 2011, is suing the team and Ruben Amaro for allegedly defaming him and ruining his job prospects for future opportunity.

In a report by Philly.com, Modami is seeking a judgment in excess of $100,000. According to the suit, Amaro terminated him because the team wanted to go in a "different direction" and was attempting to "change up the hitting program". The suit also states that Modami had gotten positive repsonses with the Washington Nationals and Los Angeles Dodgers regarding a job opportunity, but apparently Amaro defamed him.

But both teams eventually rejected Modami, the suit claims, because Amaro told both teams' general managers that he was no longer with the Phillies because he was stealing and selling memorabilia, the suit states.

We probably won't hear about this anymore, but it's interesting to read.

To make things even more interesting, the one who apparently tipped off Modami about what Amaro allegedly said was Jayson Werth.

Drama, drama, drama. Of course, $100,000 is pocket change to the Phillies so if this does go to court a retribution payment wouldn't be a big deal. What most likely will happen is that this case will be thrown out because it'll turn into a "he said, he said" arguement.

Sidenote: Our own Frank Klose bears a striking resemblance  to Modami (or so I think – it's the goatee).

Is it just me, or does Frank (right) look like Modami (left)?